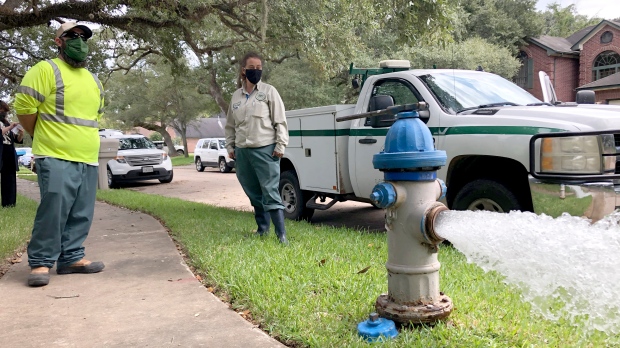 LAKE JACKSON, TEXAS — A Houston-area official said Monday it will take 60 days to ensure a city drinking water system is purged of a deadly, microscopic parasite that doctors believed killed a boy and that led to warnings for others not to drink tap water.

One sample, Mundo said, came from the home of Josiah McIntyre, the 6-year-old boy whom doctors said died earlier this month after being infected with the brain-eating parasite.

Maria Castillo, Josiah’s mother, said Monday that her son first started showing flu-like symptoms. But those quickly worsened to the point where he had trouble standing and communicating.

“We found out that it was, most likely this amoeba that was causing all of these symptoms,” Castillo said outside her home, in front of a yard sign that showed a picture of her son.

Doctors took measures to alleviate swelling in the child’s brain and tried to save him.

It was hard for Josiah’s mother to accept the death of a child so full of life.

“Josiah loved to be outside and he loved to be with his sister and his cousin,” Castillo said “He was a lovable little boy and loved everybody he was around.”

The Texas Commission on Environmental Quality warned the Brazosport Water Authority late Friday of the potential contamination of its water supply by the deadly microscopic flagellate. The TCEQ has advised the community to flush out its water distribution networks with chlorine to help eradicate the microbe, Mundo said.

The city’s water utility is trying to purge its system of any “old water” so the system can be disinfected and replaced with fresh water.

The investigation into Josiah’s death led to the detection of the brain-eating amoeba after heath officials conducted water sample tests.

The Brazosport Water Authority initially warned eight communities late Friday night not to use tap water for any reason except to flush toilets, but on Saturday it lifted that warning for all communities but Lake Jackson, where the authority’s water treatment plant is situated. The advisory also was cancelled for two state prisons and Dow Chemical’s massive Freeport works.

The advisory was finally lifted for Lake Jackson, but the TCEQ has advised its more than 27,000 residents to boil any tap water before using.

The authority’s water source is the Brazos River, and it stores the water in two reservoirs.

Naegleria fowleri is a free-living microscopic amoeba, or single-celled living organism commonly found in warm freshwater and soil, according to the U.S Centers for Disease Control and Prevention. It usually infects people when contaminated water enters the body through the nose. From there it travels to the brain and can cause a rare and debilitating disease called primary amebic meningoencephalitis.

The infection is usually fatal and typically occurs when people go swimming or diving in warm freshwater places such as lakes and rivers. In very rare instances, naegleria infections may also occur when contaminated water from other sources (such as inadequately chlorinated swimming pool water or heated and contaminated tap water) enters the nose.