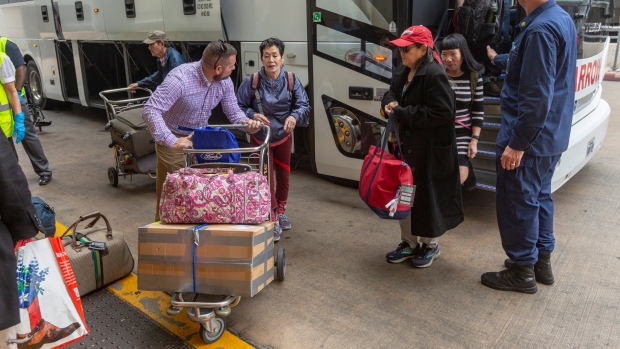 SAN ANTONIO — Dozens of U.S. passengers who were moved to a Texas air base after potentially being exposed to the coronavirus on a cruise ship were released Tuesday and allowed to go home, a day after local leaders declared a public health emergency and sought to delay the process so that more patient testing could be done.

More than 120 passengers who were moved two weeks ago from a Diamond Princess cruise ship stranded in Japan and kept in quarantine on Lackland Air Force Base in San Antonio were released “in an orderly way to minimize potential exposure to the San Antonio community,” according to a statement issued by city officials. Many were bused to San Antonio International Airport, where they were escorted to ticket counters and through security. Others who live in Texas were escorted to car rental counters.

The release was originally scheduled for Monday but was delayed by a lawsuit filed by the city. San Antonio officials had wanted additional assurances that none of the released passengers had t ested positive for the new coronavirus, after a woman was mistakenly released from quarantine over the weekend despite testing positive for it.

A federal judge denied the city’s request for a temporary restraining order, though, leading to the release of 122 passengers late Monday and on Tuesday. Seven passengers were kept in quarantine at the air base for various reasons, Laura Mayes, a city spokeswoman, told The Associated Press.

Terri Feil, of Houston, said she and her husband, David Feil, were among at least four of the passengers who were released late Monday after officials from the Centers for Disease Control and Prevention said they were free to go.

“We were jumping up and down for joy,” Feil said.

The couple’s son drove from Houston to pick them up.

“We were not going to give one person a chance to change their mind,” Feil said.

The Feils, who boarded the ship Jan. 6 for a 29-day cruise, said they’d had their temperatures taken every day for weeks and showed no symptoms. Being isolated from family and other passengers “was like a nightmare you just kept waking up to each and every day,” she said.

San Antonio Mayor Ron Nirenberg, who had said that only passengers who were symptom-free for the entire 14-day quarantine period would be released Tuesday, issued a statement saying he was “comfortable that the plan as presented will minimize the risk of exposure.”

“The release will be co-ordinated, not prolonged over several days, and passengers will not stay in local hotels and will go directly to the airport,” Nirenberg said.

The patient who was released over the weekend visited a local mall and the airport before she was brought back into isolation once the positive test was discovered, city officials said. There have not been any known cases of the illness being transmitted in the community, Nirenberg said.

Trudeau doubles down on promise of vaccines for all Canadians by fall. Is that still a realistic target?

Why you might want to start wearing better masks — even outdoors

The dangers of drugged driving are outpacing drunk driving