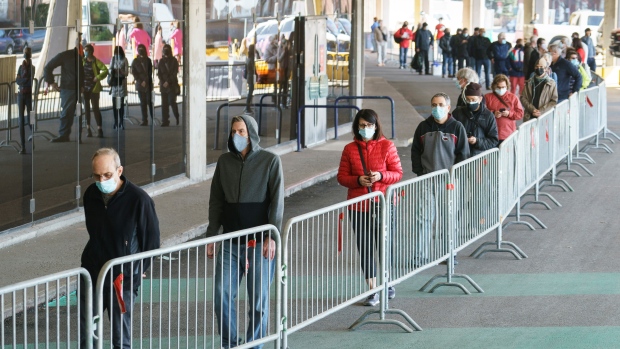 MONTREAL — Quebec is shortening wait times for second doses of the Pfizer and Moderna COVID-19 vaccines from 16 to eight weeks.

“It is important that the offer to advance the second dose of vaccine be made according to the prioritization schedule established by age group, as older people are at greater risk of developing complications from COVID-19,” the ministry said in a news release Thursday.

For people who are immunocompromised or on dialysis, the recommended interval in between doses is four weeks.

He will be joined by vaccination campaign director Daniel Paré, as well as Quebec’s public health director, Dr.Horacio Arruda.

The number of new COVID-19 cases in the province has steadied recently, with daily infections below 300 in Quebec for four days in a row.

Quebec has also administered a total of 5,808,464 doses since the start of the vaccination campaign.

New data from the Institut national de santé publique (INSPQ) shows that Montreal and Laval, two of the cities in Quebec most affected by COVID-19 infections, have some of the lowest vaccination rates in the province.

The INSPQ reports about 70 per cent of Quebecers aged 12 and over have so far received at least one dose of the vaccine. This number is only 67.5 per cent in Montreal and 67.3 per cent in Laval.

Public health states the rate is higher in more affluent neighbourhoods than in communities with lower household incomes. In Montreal North, one of the most disadvantaged areas, the vaccination rate is only 43.8 per cent.

“I hope we get to the 75 per cent target and I understand that we have to do some education in some areas,” he said. “Some people are scared, with no reason, about the vaccine. So, we have to explain to them why they need to be vaccinated and we will do so.”

Legault stated the government plans to distribute more information in as many languages as possible, adding he wants to find an incentive to help those hesitant to get inoculated.

— with files from The Canadian Press.