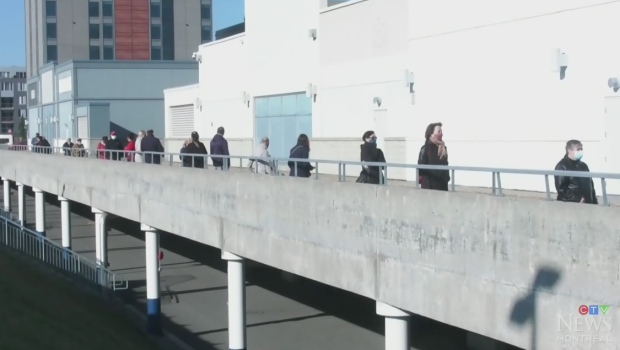 Quebec had set 16 weeks as the period between first and second doses for all COVID-19 vaccines authorized in Canada.

The Health Department said the decision to shorten the wait for AstraZeneca is based on advice from the province’s immunization committee. It added, however, that a clinical trial has shown the vaccine is most effective if first and second doses are spaced 12 weeks apart.

“The best advice is, if you want to wait for the full 12 weeks, you can do that,” Dube said, adding that the difference in effectiveness is “marginal” and that the shorter wait is intended for people who want to get fully vaccinated sooner.

The letter by the Comite sur l’immunisation du Quebec noted that the study, conducted in the United Kingdom, may be imprecise because of the small sample size.

Quebec has almost 150,000 doses of the AstraZeneca vaccine in stock. The province stopped administering first doses of that vaccine on May 13 over concerns about rare cases of blood clots. It also has not offered the vaccine to people under 45.

While the government recommends that people who received AstraZeneca get a second dose of the same, it will allow people to opt for a different vaccine for their second shot, but they will have to wait longer between doses.

Quebec Premier Francois Legault told reporters Thursday the decision to shorten the interval was not linked to expiry dates of AstraZeneca.

The decision, he said, was based on the recommendation from the immunization committee. “We want to accelerate the second dose for Moderna and Pfizer also, because we want to have the immunity as soon as possible.”

Dube said the government will announce its plan to accelerate second doses of the two other vaccines next week.

According to Quebec’s public health institute, 57.1 per cent of residents have received at least one vaccine shot, while 5.9 per cent have received two doses or are considered adequately vaccinated after having tested positive for COVID-19 and received one dose. Authorities said 86,453 doses of vaccine were administered Wednesday, for a total of 5,202,132.

Meanwhile, Quebec’s blood bank said Thursday that a study of 7,924 blood donors suggested that 10 per cent of Quebecers had developed antibodies to COVID-19 as a result of infection by the end of the pandemic’s second wave in March. Hema-Quebec said in a release that its study showed the need for vaccination, because only a small percentage of the population had a level of immunity to COVID-19.

The study estimated that 600,000 people in Quebec aged 20 to 69 developed antibodies to COVID-19 after being infected between the beginning of the pandemic and March 11. As of May 27, COVID-19 tests had detected 243,104 infections among that age group, according to Health Department data.

The Hema-Quebec study found that younger people were more likely to have had COVID-19 and the percentage of people with antibodies decreased with age, ranging from 19 per cent among people aged 18 to 24, to 9.5 per cent in people 70 and over.

Women were more likely to have been infected, with 16.9 per cent showing antibodies in their blood, compared to 12.5 per cent of men.

Laval, Que., had the highest rate of people with antibodies in the province, with 18.5 per cent, followed by Montreal, with 16.7 per cent. The two cities have been Quebec’s most affected by the COVID-19 pandemic.

Quebec reported 436 new cases of COVID-19 Thursday and 10 more deaths attributed to the novel coronavirus, including one within the previous 24 hours. Health officials said hospitalizations dropped by five, to 394 and 96 people were in intensive care, a drop of five.

— This report by The Canadian Press was first published in French on May 27, 2021.