You Are Here Home Health News Quebecers 70 and older can get COVID-19 booster shot if they want, health minister says 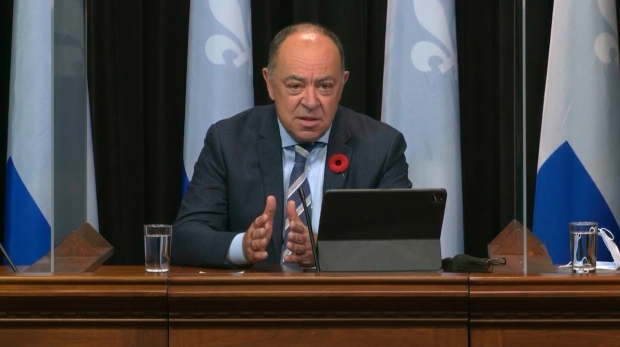 MONTREAL — Quebec government officials say a third shot of the COVID-19 vaccine will be available to people aged 70 and older if they wish to receive one, expanding on the current booster program that has so far been limited to immunocompromised people.

“This recommendation is based on the fact that the vaccine protection tends to decrease slightly in people aged 80 and over,” Dubé said.

“At this time, however, it’s not necessary to offer a booster dose to people under the age of 70.”

Booster shots are recommended for older people but only after six months have passd since their second dose. According to the schedule announced Tuesday, eligible Quebecers can begin booking a third dose on the following dates:

Appointments can be made on the Clic Santé website next week.

The government also announced Tuesday that people who got two doses of the AstraZeneca/Covishield or Johnson & Johnson vaccine, or another type of viral vector vaccine, should get a third dose of a mRNA vaccine (Pfizer-BioNTech or Moderna).

People in this group can get a third dose as of Nov. 25.

For now, the Quebec government has less than half the stock of booster shots it needs in order to administer third doses to all 1,250,499 eligible seniors in the booster shot roll-out.

However, it said in a news release it has already asked the federal government for more doses to increase the current supply of about 500,000 doses.

The announcement from Quebec officials on Tuesday comes on the same day Health Canada authorized the Pfizer booster shot in all adults 18 and older.

The booster, designed to maintain protection from the coronavirus over time, is identical to the regular Pfizer-BioNTech vaccine given out to millions of Canadians already.

Clinical trials showed side effects from the booster were more or less the same as the regular shot and Health Canada’s review found the booster dose met the federal government regulator’s safety, efficacy and quality requirements, according to a news release.

There is no evidence pointing to diminished protection from the vaccines in people under 70, Dubé said, which is why booster shots are limited to older populations in Quebec.

“We know there is a phenomena that when you get older, your immune response can be lower and also can last for a lower time,” added Dr. Arruda.

“So it’s clear actually from the data we have in Quebec, that over 80 this phenomena is [happening] now, so it’s why we are recommending adding a third dose that will stimulate back the immune system and make the antibodies and similar systems be ready in case there is a new infection.”

Currently in Quebec, only people on dialysis and certain people with weakened immune systems, such as those receiving chemotherapy or radiotherapy, certain people with HIV, and people taking medications that affects their immune response are eligible for a booster shot.

Booster shots are still recommended even if the person has already had COVID-19.