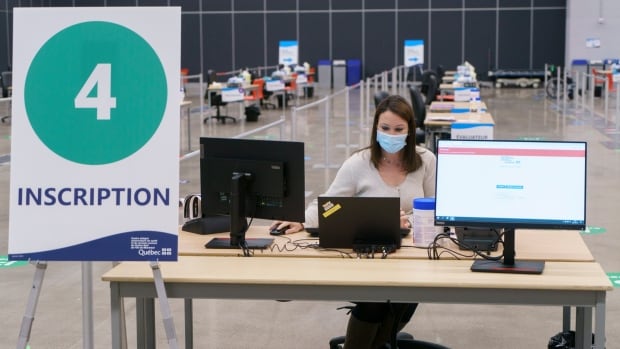 The province’s COVID-19 vaccination campaign is finally ramping up, with Quebecers 80 and older in the general population able to get shots as early as next week.

People between ages 70 and 79 who live in the Montreal area will also be able to get the shots, Radio-Canada has learned.

The Olympic Stadium’s atrium is currently being turned into a vaccination site.

The province’s first COVID-19 vaccines were administered in Quebec on Dec. 14, and the inoculation campaign has since focused on residents in long-term care homes and private seniors homes, as well as health-care workers.

‘We think it should go well’

People will be able to schedule their appointments for the first dose online through the Clic Santé platform shortly after the province’s news conference later Tuesday, as well as by phone.

They will have to provide information such as their postal code and date of birth, and a search engine will provide them with a list of a available appointments near them.

“You’ll get a ticket to receive a COVID-19 vaccine. There will be reminders. You’ll be asked to confirm your presence,” said Stéphane Lajoie, the executive director of Clic Santé.

“It is a process that is known because it’s already being used by a large portion of the population, especially for the flu shot campaigns. We did the last one, and we’ve done about ten campaigns. We’ve gotten a bit of practice, and people know the website well. We think it should go well.”

People who do not have a valid health insurance card will have to schedule their appointment by phone, Lajoie said.