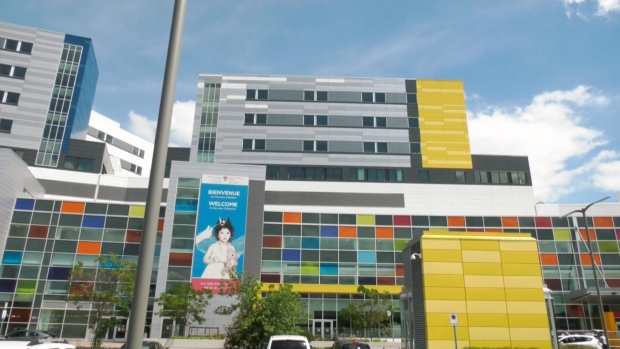 MONTREAL — Specialists at Montreal’s two pediatric hospitals say a greater number of children are being admitted for treatment during Quebec’s second wave, with a rare but life-threatening condition that can develop several weeks after a child gets COVID-19.

Multisystem inflammatory syndrome in children (MIS-C) is a delayed immune reaction to COVID that can occur 2-6 weeks after the initial infection.

The worrisome trend is the consequence of intense virus transmission this past fall and winter, which has infected many more children than the first wave did, said Dr. Rosie Scuccimarri, a rheumatologist at the Montreal Children’s Hospital, who makes the diagnoses.

“We are living it every day. Every month we’re seeing about 6-7 cases and it has not let up,” even though case numbers have gone down, the specialist said.

“In February we are seeing the same numbers we saw in December and January.”

She calculates the hospital has admitted more than 30 young patients since October, compared to 10 during the first wave.

Also multiplying, are the concerns. On its own, the number of children getting sick with the rare illness is a significant preoccupation, but the doctors also observe that patients now are in a worse state than children admitted last spring.

“We’re seeing more severe cases than the first wave. The children are sicker. A third of our children have gone into our intensive care unit,” said Scuccimarri, explaining the illness can cause low blood pressure.

Without the medical support they get in an ICU the children could die.

To her knowledge, no children in Canada have died from MIS-C, but deaths have been reported in the United States and countries in Europe.

The situation at Quebec’s other pediatric site, Ste. Justine mirrors what’s happening at the Montreal Children’s.

About 55 patients have been admitted to Ste. Justine Hospital with MSI-C since the beginning of the pandemic, according to a rheumatologist there, Dr. Marie-Paule Morin.

Morin doesn’t have a numeric breakdown yet of how many became sick as the curve rose in Quebec for the second time, but says she agrees with Scuccimarri that “the children of the second wave are sicker and we also see more cases.”

Admissions at Ste Justine intensified at the end of January and into February, she said, 4-8 weeks after the winter holidays.

As for why some of the patients are more seriously ill than in the past and need intensive care – “it’s hard to say,” said Morin.

“Is it because there are more kids with COVID, and so we’re seeing more of it – I don’t know. We don’t have an answer yet.”

Scuccimarri says her “suspicion is that it’s not linked to a variant” and that again the numbers and severity of illness just reflect the way children have been affected this time around.

But the presence of more infectious variants in the province does provoke a fair amount of worry among the pediatric teams treating the patients – for a different reason.

“It worries us because this is a scary illness. We want to make sure children stay healthy,” so if variants take hold and COVID-19 cases start to climb, more children could potentially develop the still rare MIS-C, Scuccimarri said.

That unsettling idea is a good incentive for the tens of thousands of families now on March break to stick with their family bubbles, say the doctors from both pediatric health centres.

“We’re not out of the woods. Yes, the numbers have decreased, they’ve decreased because we’re following the public health recommendations, but if we relax those, unfortunately, we will see an increase just like we saw an increase after the Christmas holidays. So I am concerned,” said Scuccimarri.

Multisystem inflammatory syndrome in children is a rare complication of COVID-19 that typically occurs 2-6 weeks after the initial phase of COVID infection, said Scuccimarri.

The body’s immune system is reacting to that previous infection.

The majority of children admitted to the Montreal Children’s Hospital with the syndrome are otherwise healthy children who do not suffer from other chronic diseases.

She explained that children usually come down with a fever but can then be affected by a constellation of symptoms including, a rash, bloodshot eyes, redness of the lips and tongue, an enlarged lymph node in the neck, abdominal pain, diarrhea and vomiting. Some can also have headaches, neck pain and suffer from confusion.

About one-third of patients in the last five months developed serious life-threatening symptoms, while the others had mild or moderate cases.

It might take only a few days for a child with mild illness to recover, but sicker patients can be hospitalized for a few weeks.

The young patients who need to be treated in the intensive care unit, are usually there because they’ve developed dangerously low blood pressure or heart inflammation, that impedes the heart’s ability to pump, and who without ICU support, wouldn’t survive.

They’re tended to at the Montreal Children’s Hospital, by a team that includes Scuccimarri, a pediatric rheumatologist, as well as pediatricians, cardiologists and other specialists.

Some of these children in the ICU, might suddenly need to be placed on a ventilator. Most do not, said Scuccimarri. But they do require continuous infusions of medications to maintain their blood pressure and treat other symptoms.

When the children are well enough to go home, they generally improve quickly and most recover fully, says the specialist.

There were cases when a child was left with an irregular heartbeat or changes to coronary arteries – issues that require follow-up.

Morin at Ste Justine Hospital again emphasized that while MSI-C can be very serious, it’s still rare overall, and they know more now about how to treat it.

Still, she indicated that signs of the illness should raise red flags so they will be recognized and treated quickly.