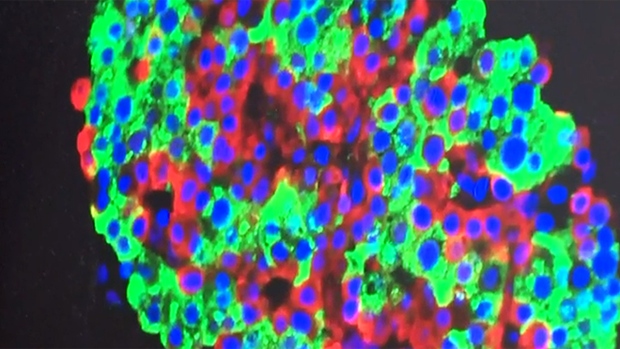 TORONTO — Amid a rise in people developing a painful condition called pancreatitis, doctors are looking to a rare procedure to help patients with this chronic pain — creating a “super liver” using the patient’s own cells.

The pancreas, located behind the stomach, produces enzymes that assist with digestion, as well as hormones that help you to process sugars. Pancreatitis is a condition that interferes with the functioning of the pancreas, and it can come on suddenly and intensely or can be a chronic problem.

For 27-year-old Kaitlin Saari, who was diagnosed with pancreatitis last summer in the middle of the pandemic, the condition was debilitating.

“I just started to get sicker and sicker,” she told CTV News. “I was in much more excruciating pain after anything would go into my mouth, like even drinking water.”

While some people with mild cases of pancreatitis get better on their own, severe cases can be life-threatening.

Saari was experiencing nausea and vomiting regularly. She had no energy, and was unable to go for walks or see friends.

Her condition worsened until she wound up in hospital, during COVID-19 lockdowns. She was dealing with serious pain and was in hospital for weeks on end, only able to leave for a few days before she was hospitalized again, relying on heavy narcotics to manage the pain.

“I lived in the hospital,” Saari said.

It was clear that something needed to done.

The answer came in a rare procedure called “total pancreatectomy and islet autotransplantation.”

Saari was the first of two patients treated at Toronto General Hospital, and one of the first in Ontario, to receive the procedure, the first step of which involved removing her inflamed pancreas in a laborious, 12-hour operation.

But removing the pancreas creates another problem — without a pancreas, patients become diabetic, requiring insulin for life.

That’s why, in this new procedure, surgery to remove the pancreas is only the first step.

The lab technicians isolate the pancreatic cells, and then return them to the operating room, where the surgeon injects them into the patient’s liver.

Within the liver, these cells take root and grow.

“Because we’re taking out somebody’s pancreas that is diseased, we’re extracting the cells that make insulin, which is about one to two per cent of the pancreas, and we’re putting those cells back into the liver,” he said.

“And because they’re the patient’s own cells, the body will accept them without need for any anti-rejection drugs, so it’s a very unique situation. They’re very precious cells.”

Saari is a success story, among the 70 per cent of cases where the new “super liver” starts to also produce some or all of the insulin her body requires.

The incidence of pancreatitis has been increasing worldwide, and doctors aren’t sure why. There are over 116,500 new cases of pancreatitis in Canada now, representing a 75-per-cent increase in its incidence since 1990.

In 2016, there were 474 deaths from this condition, making the development of treatments all the more vital.

This “super liver” procedure was first offered in Alberta, and Shapiro said patients would fly in from across the country to receive this unique operation. They operate on around 10-15 people per year, including small children.

“We have a two-year-old child who remains off insulin today with excellent sugar control,” Shapiro said.

The procedure is also being done in Toronto now, something that Dr. Trevor Reichman, a Toronto surgeon, calls “exciting.”

“There’s a group of patients that don’t have a lot of options as far as long-term durable treatment outside of basically being dependent on narcotics,” he told CTV News. “So this is a real opportunity to take care of a very challenging group of patients and really offer them a long-term durable treatment in a way to sort of get their life back after.”

Patients don’t have any pain afterwards and can continue with their normal lives, he said, making it a life-changing procedure.

This method also has implications for the broader medical world, potentially opening up avenues for treating diabetes itself, or for using a patient’s own cells to repair organs.

“It’s in the larger area of what we call cell and regenerative medicine, it’s the idea of being able to repair or regenerate tissues.”

Right now, this operation is only available to those who are suffering from chronic pain as a result of pancreatitis. But Wouters explained that if we could transplant these pancreatic islet cells into those with diabetes, it could potentially allow those patients to make their own insulin.

It’s something researchers are looking into in Alberta, exploring how a patient’s stem cells might be extracted, grown into these pancreatic islet cells and re-injected to help the body make insulin.

“In theory, if we make enough cells, you could potentially cure Type 1 and Type 2 diabetes,” he said. “And the process now of simplifying that process and scaling it up is the challenge that we’re working on in the lab.”

While receiving a super liver may not be the answer for everyone suffering from pancreatitis, it’s undeniably a step towards a world where our own cells could help replace the function of failing or diseased organs.