Obtaining the Campaigns list from the server has failed!
Server response:
CM Ad cahger Server plugin is not active on https://legendarygroup.co/admanager/
You Are Here Home Health News Record highs of children hospitalized with COVID-19 in the U.S. have Canadians concerned 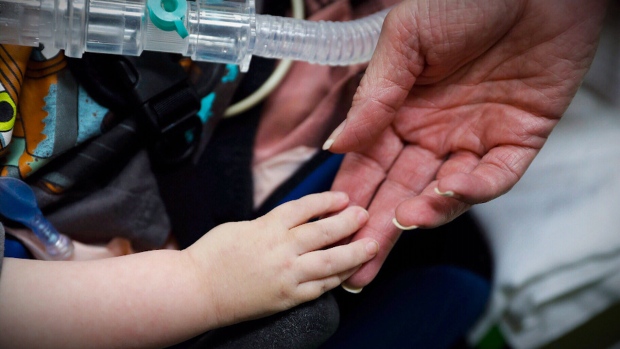 TORONTO — A scary rise in pediatric COVID-19 cases in parts of the United States, with children hospitalized, some in ICU and on respirators, is causing fear among Canadian parents.

With fall approaching and the reopening of schools on the horizon, experts are looking to pin down the cause of the increase in cases among children in the U.S. and whether or not Canada could see the same increase.

The number of children hospitalized with COVID-19 in the U.S. hit a record high of just over 1,900 on Saturday, as hospitals across the south were stretched to capacity fighting outbreaks caused by the highly transmissible Delta variant.

Children currently make up about 2.4 per cent of the U.S.’s COVID-19 hospitalizations.

In some regions, infants are being airlifted to other hospitals as some pediatric ICU’s run over capacity due to a combination of injuries, other respiratory illnesses and COVID-19 cases.

In Missouri, 14-year-old Marianna is among the growing number of teens and children in hospital with COVID-19, because she chose to skip vaccination available to those aged 12 and older.

Those younger than 12 are not eligible to receive a vaccination right now. A recent study that looked at more than 6,000 households in Ontario has suggested that children under 12 may be more likely to transmit the virus.

“Just to give you an idea of all the positive tests that we’ve had [at the children’s hospital] in the past couple of weeks, about 75 per cent of them are in children under 12,” Mestre said.

Doctors suspect the more contagious Delta variant is at work in the increase of COVID-19 cases among children.

But another factor is vaccination. Mestre said that they’ve seen children hospitalized because they were infected by an unvaccinated parent.

“It’s […] frustrating for when we have children that come in because we see that the parents may have not been vaccinated and they may have passed infection on to their children,” he said.

“So that’s always frustrating as a caretaker, especially when you’re dealing with children, that they may not have a say.”

In many cases, the children who are hospitalized have health problems or risk factors that could contribute to a more severe case.

“Those that are obese or overweight tend to have the highest risk factors in terms of requiring hospitalizations and requiring more intensive services once they’re hospitalized,” Mestre said.

He added that children generally do better than adults when they contract the virus, with much lower mortality. But children with risk factors such as diabetes or asthma are more at risk and require more support in the hospital.

And increasingly, reports of long-haul COVID-19 in children are causing concern. While children may be significantly less likely to die if they contract the virus, there have been reports of children plagued by lingering symptoms, some of which can be severe. And the phenomenon is not well understood right now, making it hard to know who is at risk of developing it.

A fifth of all COVID-19 hospitalizations in the U.S. are in Florida currently. The state hit a record number of 16,100 hospitalized patients on Saturday, according to Reuters. The U.S. as a whole has been seeing an average of 129,000 new cases per day.

“Never let your guard down,” Mestre said. “That’s something that, when we were in June here in Miami, we were thinking about loosening some of the restrictions that we had and then we got hit by the Delta variant.”

Parents and doctors in Canada are nervously watching the situation with pediatric COVID-19 cases south of the border. But it may not necessarily be Canada’s future.

DOES THIS MEAN ANYTHING FOR CHILDREN IN CANADA?

Lynora Saxinger, an infectious disease specialist in Edmonton, told CTV News that there are key differences between the situation in Canada and the U.S.

In Canada, as of Saturday, 72 per cent of the eligible population are fully vaccinated.

Saxinger pointed out that we have not seen a huge boost in pediatric cases of COVID-19 recently in Canada.

“It’s very important to be cautious and watch carefully, but at the moment I think that there’s been a little bit of a shift in people’s perception that might not really be needed at this point,” she said.

“It’s still unclear actually whether Delta itself is more dangerous for kids or if in fact the high transmission under certain circumstances is an issue.”

She added that there are “so many different variables going on” in each region, making it hard to directly apply what is occurring in places such as the U.S. to Canada.

“For a parent, I think it’s actually probably most important to look at what’s happening in your community, and in your network, if you have a highly vaccinated network and the community spread remains very low, I think that the spectre of Delta is much, much more distant for you and your family than it would be in some places that we’re getting news about.”

Some parents are eagerly looking forward to vaccines being cleared for children younger than 12 years. But it’s a process that can’t be rushed.

“The bar has to be very high for safety in that age group because that group has very, very low rates of significant illness and significant outcomes from COVID,” Saxinger pointed out. “And so we have to make double, double, double sure that the vaccine is safe and effective in that group.”

She doesn’t doubt that the vaccine will be proven safe and effective for younger children, but it’s important to have that certainty, especially when treating a population that is less at risk from the virus.

“We do have to make sure that we have that data before making a recommendation, and that once it’s available it will really increase people’s comfort level in terms of what their kids can and cannot do,” she said.

“Until that time, it’s very clear from elsewhere that if we vaccinate all of the adults, the kids are significantly protected and if we keep community transmission low, the kids are protected. So I think that combination is really what we’re looking at for the fall.”

“One of the things that we’re pushing for here in Florida, Miami in particular, is vaccination of those that are eligible to receive the vaccine. So anybody 12 years of age and older, we highly recommend that they receive the vaccine and especially if they have any of those risk factors,” he said.

“Already right now we’re seeing our children go into school, we’re starting the school year here in Florida, so we are keeping a close eye on things and seeing how that affects the transmission rates just given that the Delta variant is so contagious.”

Doctors say that in the U.S., children are recovering after being treated with treatments that work in adults.

Still, U.S doctors say it is not time to let the guard down, as they keep an eye on what happens when Delta spreads and schools reopen.

With files from Reuters