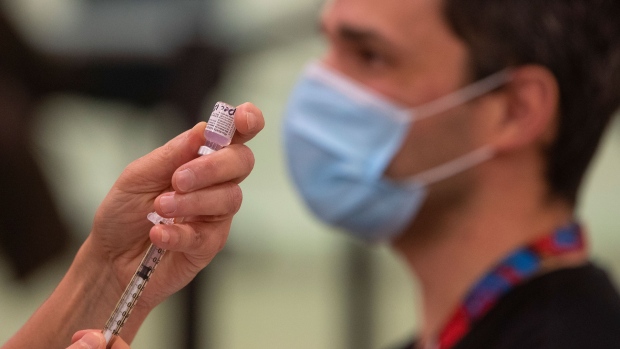 TORONTO — As Canada enters the beginning of a Delta-variant-driven fourth wave, health officials across the country are saying its severity will depend predominately on vaccine uptake.

And there are some rural or remote areas where vaccination rates are lagging compared to other parts of the country, stifling efforts to control the virus.

While Canada’s vaccination rates are among some of the highest in the world, some of the country’s lowest can be found in the Prairies.

According to provincial data, the region of Forty Mile is also struggling to get needles in arms with roughly 30.7 per cent of the eligible population vaccinated, followed by Two Hills County at 32.6 per cent.

However, Alberta health officials have said that these numbers may be low because First Nations reserves in the province ran their own vaccination drives and those numbers are not included in regional tallies.

Officials in the province say there are a number of factors keeping residents from getting vaccinated, including difficulty accessing vaccines, medical reasons, religious beliefs, and misinformation.

The Saskatchewan Ministry of Health told CTVNews.ca on Tuesday that the province’s vaccination rate is lowest in the Far North Central region where 46 per cent of eligible residents have received the first dose of a COVID-19 vaccine and 33 per cent have both doses.

A spokesperson for the province’s Ministry of Health said in an email that the province encourages everyone who is eligible to get vaccinated, highlighting that recent infections in Saskatchewan are occurring in those who have not gotten the jab.

Canada’s Chief Public Health Officer, Dr. Theresa Tam, released federal modelling data in July that indicated that COVID-19 cases are beginning to rise as a result of the more contagious Delta variant. However, she said there is still time to flatten the curve.

“The updated longer-range forecast shows how the epidemic trajectory may evolve through early September. It suggests that we are at the start of the Delta-driven fourth wave, but that the trajectory will depend on ongoing increases in fully vaccinated coverage, and the timing, pace and extent of reopening,” Tam said.

Federal data reports that there are approximately six million eligible Canadians who have yet to roll up their sleeves and get vaccinated.

According to data tracked by CTVNews.ca, 81.4 per cent of the eligible population age 12 and over have received at least one dose of a COVID-19 vaccine and 70.3 per cent are fully vaccinated, as of Tuesday afternoon.