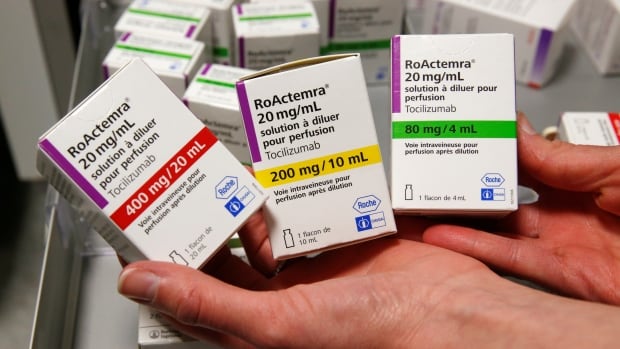 Roche’s arthritis drug tocilizumab cuts the risk of death among patients hospitalized with severe COVID-19, also shortening the time to recovery and reducing the need for mechanical ventilation, results of a large trial showed on Thursday.

The findings — from the U.K.-based RECOVERY trial, which has been testing a range of potential treatments for COVID-19 since March 2020 — should help clear up confusion about whether tocilizumab has any benefit for COVID-19 patients after a slew of recent mixed trial results.

“We now know that the benefits of tocilizumab extend to all COVID patients with low oxygen levels and significant inflammation,” said Peter Horby, a professor of emerging infectious diseases at Oxford University and the joint lead investigator on the RECOVERY trial.

In June last year, the RECOVERY trial found that the cheap and widely available steroid dexamethasone reduced death rates by around a third among the most severely ill COVID-19 patients. That drug has since rapidly became part of standard-of-care recommended for severe patients.

Tocilizumab, sold under the brand name Actemra, is an intravenous anti-inflammatory monoclonal antibody drug used to treat rheumatoid arthritis. It was added to the trial in April 2020 for patients with COVID-19 who required oxygen and had evidence of inflammation.

This translates to an absolute difference of four per cent. It also means that for every 25 patients treated with tocilizumab, one additional life would be saved, Horby and his co-lead investigator Martin Landray said.

They added that benefits of tocilizumab were clearly seen to be in addition to those of steroids.

“Used in combination, the impact is substantial,” said Landray, who is also an Oxford professor of medicine and epidemiology.

He added that results “clearly show the benefits of tocilizumab and dexamethasone in tackling the worst consequences of COVID-19, improving survival, shortening hospital stay, and reducing the need for mechanical ventilators.”

Roche’s drug division chief Bill Anderson said last week that previous mixed results were likely due to differences in the type of patients studied, when they were treated, and the endpoint — the juncture at which success or failure is measured.

“We think we’re sort of zooming in on both the most relevant endpoints and relevant patient population,” Anderson said. “It seems like the ideal candidates are patients who are really in that acute phase of inflammatory attack.”

Actemra, along with Sanofi’s similar drug Kevzara, was authorized by Britain’s NHS in early January for COVID-19 patients in intensive care units after preliminary data from a smaller study called REMAP-CAP indicated it could reduce hospital stays by about 10 days.

The researchers said preliminary results will be made available on the medRxiv preprint server shortly and submitted to a peer-reviewed medical journal.

Dr. Niall Ferguson, head of critical care at the University Health Network and Sinai Health System, sees potential in tocilizumab, approved for use in Canada to treat rheumatoid arthritis.

Although evolving data has been mixed and is still emerging, Ferguson noted earlier this week that the monoclonal antibody is already being used off-label for some severe patients.