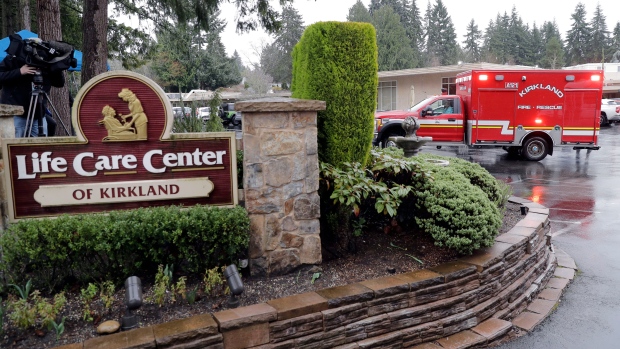 KIRKLAND, WASH. — In the days before the Life Care Center nursing home became ground zero for coronavirus deaths in the U.S., there were few signs it was girding against an illness spreading rapidly around the world.

Visitors came in as they always did, sometimes without signing in. Staffers had only recently begun wearing face masks, but the frail residents and those who came to see them were not asked to do so. And organized events went on as planned, including a purple- and gold-festooned Mardi Gras party last week, where dozens of residents and visitors packed into a common room, passed plates of sausage, rice and king cake, and sang as a Dixieland band played “When the Saints Go Marching In.”

“We were all eating, drinking, singing and clapping to the music,” said Pat McCauley, who was there visiting a friend. “In hindsight, it was a real germ-fest.”

That was just three days before last Saturday’s announcement that a Life Care health care worker in her 40s and a resident in her 70s had been diagnosed with the new virus. The news would be followed over the next few days by the first resident deaths: two men in their 70s, a woman in her 70s and a woman in her 80s.

Of the 14 deaths across the nation as of Friday, at least 10 have been linked to the Seattle-area nursing home, along with dozens of other infections among residents, staff and family members.

A man in his 60s who died Thursday had been a visitor to the nursing home in Kirkland, public health officials announced late Friday.

As disease detectives try to solve the mystery of how exactly the coronavirus got inside Life Care, they also are questioning whether the 190-bed home that had been fined before over its handling of infections was as vigilant as it could have been in protecting its vulnerable patients against an outbreak that had already killed thousands in China and around the world.

A team of federal and state regulators planned to visit Life Care on Saturday, a move that could lead to sanctions, including a possible takeover of its management. The team will look at the home’s practices, including infection control.

In an outbreak like this, “it’s not business as usual, so business as usual is not going to be OK,” said Dr. Mark Dworkin, an epidemiologist at the University of Illinois at Chicago School of Public Health. “There needs to be some sort of mobilization within the facility for enhanced adherence to procedures. Infection control and visitors logging in. These things need to be translated out across the country.”

Life Care did not respond to questions from The Associated Press that were sent to an email address set up for news media inquiries. In the week since the outbreak began, the centre has issued statements saying it grieves with the families who have lost loved ones. It also has noted that visits have been halted, staffers are being screened and residents with any kind of respiratory illness have been placed in isolation.

Several family members and friends who visited residents at Life Care over the past few weeks told the AP that they didn’t notice any unusual precautions, and none said they were asked about their health or if they had visited China or any other countries struck by the virus.

Pat and Bob McCauley, who visited a friend eight times in two weeks before the outbreak, said they noticed some staff members wearing face masks during a visit on Feb. 26 that included the Mardi Gras party but didn’t think much of it. They went to a common room with a half-dozen tables and began singing along with their friend as residents in wheelchairs bunched together to get clear view of the banjo, bass and washboard players.

Two days later, when the couple arrived for another visit, they realized the reason for the masks. A staff member told them at the door that they would have to wear ones themselves because a “respiratory virus” had spread.

They turned around and went home.

Lori Spencer, whose 81-year-old mother is at Life Care, said she also noticed the masks on a visit that same Wednesday and how packed the place was.

“The hallways were crowded with people. The place was buzzing,” she said. “All the doors to the rooms were open, and I could see there were multiple people in there. I kept thinking how people were on top of each other.”

Spencer said that firefighters had just visited the place, too, and there were student nurses as well.

“We’re cooking together and eating together,” Evan Hurley said. “Trying to actually trace this all back to who’s been exposed is difficult.”

Betsy McCaughey, chairwoman of the non-profit Committee to Reduce Infection Deaths, said that by the day the Mardi Gras party was held, the nursing home should have been doing more to protect its residents.

“All these nursing facilities hold parties,” she said. “The issue is: Were attendees asked ahead of time, `How are you feeling? … Have you travelled to one of the coronavirus hot spots? Has someone in your family travelled to a hot spot? Is there any illness in your family?”‘

McCaughey estimates 380,000 nursing homes residents die each year of infections, about half of them preventable. She said federal regulators are largely to blame for not holding nursing homes to the same standards as hospitals. While residents of nursing homes may need more social interaction than hospital patients, “they shouldn’t have to sacrifice their lives for it,” she said.

Exactly how the virus made its way into the nursing home remains a mystery. One theory is that someone who became infected overseas brought it to Washington state and passed it on to others. Ordinarily in nursing homes, bedridden patients have the virus brought to them by visitors or staff members who are sick.

While Life Care generally has a good rating with the federal Centers for Medicare and Medicaid Services, state inspectors last April found infection-control deficiencies following two flu outbreaks that affected 17 residents and staff. Life Care was fined $67,000. A follow-up inspection found that it had corrected the problems.

As of Friday, 69 residents remained at Life Care after 15 were taken to the hospital within the past 24 hours. King County Executive Dow Constantine said the state has offered to help families set up home care if they want to move their loved ones out.

Dr. Stephen C. Morris, a University of Washington School of Medicine public health specialist who was sent into the nursing home to evaluate patients Thursday, said that in the midst of this crisis, the staff there needed help.

Family members said that since the nursing home has been locked down, they have agonized over leaving their loved ones inside and have resorted to communicating with them by tablet computers, cellphones and signs held up at the windows.

Patricia Herrick, whose 89-year-old mother died Thursday, said it was difficult to know that her mother was caught in the epicenter of the outbreak, in a room so nearby but completely inaccessible.

“Knowing that she was in an environment that is dangerous and not being able to help … it was awful,” she said. She said she wants her mother tested to see if she died of the virus.

Herrick said she noticed some staffers were wearing masks three days before the Mardi Gras party visit, but she didn’t think much of it. She also said she walked right in that day without signing the visitors log. But she thinks the problem lies not with the staff of Life Care but with government health officials.

“Even at the state level, the department of health should have dictated what these facilities should do: No parties. Anyone with respiratory problems goes into isolation,” Herrick said. “This is a wake-up call. There are holes in our system.”