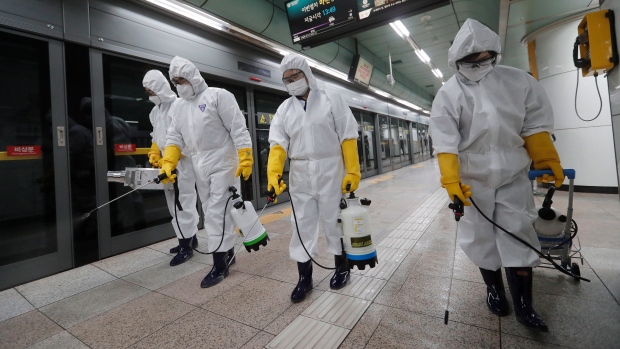 SEOUL, KOREA, REPUBLIC OF — South Korea announced it will end visa-free entry for Japanese citizens starting Monday in retaliation for a two-week quarantine imposed by Japan on all visitors from South Korea because of its surging viral outbreak.

South Korea’s first vice foreign minister, Cho Sei-young, also announced Friday that it will strengthen travel entry restrictions on all foreign citizens coming from Japan and could reduce the number of airports at which flights from Japan can land.

He said Japan’s move was based on a misunderstanding of South Korea’s active efforts to fight the virus, which he insisted were in contrast to Japan’s “non-transparent and passive quarantine activity” reflected by its much smaller number of virus tests.

“Our government once again expresses our deep regrets over Japan’s measures that it unilaterally announced without prior consultation or notification,” Cho told reporters. He did not take any questions.

Relations between South Korea and Japan sank to their lowest point in decades last year as they feuded over trade issues, wartime history and military co-operation. South Korea has not taken any countermeasures against more than 90 other nations that have banned or restricted visitors from the country.

The 14-day quarantine announced by Japanese Prime Minister Shinzo Abe on Thursday also will apply to visitors from China. The government in Beijing issued a softer response, with foreign ministry spokesman Zhao Lijian saying that Japan’s measures were “understandable.”

South Korea has confirmed more than 6,500 cases of infection with the new coronavirus, but its numbers of new cases have been declining in recent days.

Tomita replied that Japan is facing a “critical period” that will determine whether it can successfully stem the spread of the virus. Japan counts more than 1,000 cases, including about 700 from a cruise ship.