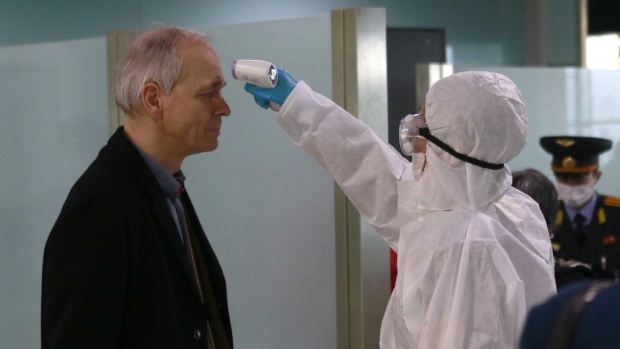 Shares in Asia and the Mideast and U.S. futures were down sharply, reports on the health of the economies of Japan and China stirred more unease, and the downturn was being felt by people around the world.

“Our business is one-fifth of what it was before,” said Cheng Sheng, who helps run a food stand in Beijing that sells sausages and noodles. “There’s much less foot traffic. There are no people.”

As the weakening economy was blamed at least in part on the virus that has infected more than 110,000 people, cases were reported in more than half the world’s countries and flash points were erupting around the globe.

In the United States, where more than 500 infections have been reported, eyes were fixed on cruise ships on opposite sides of the country that were kept at bay over fears of virus threats.

Passengers were disembarking the Regal Princess early Monday after it received clearance to dock in Florida. Tests of two crew members eyed as possible carriers of the virus came back negative.

The Grand Princess, meantime, was expected to dock in California with 21 people who tested positive for the coronavirus on board. Passengers were to be placed under quarantines.

In Saudi Arabia, falling oil prices led to steep drops on Riyadh’s stock exchange. The country cut off air and sea travel to and from Bahrain, Egypt, Iraq, Italy, Kuwait, Lebanon, South Korea, Syria and the United Arab Emirates after earlier closing off its land borders.

All Saudi Arabian schools and universities were closing beginning Monday.

In Italy, the government took a page from China’s playbook, issuing a quarantine order attempting to lock down 16 million people across a swath of the country’s north. Italy’s financial hub of Milan and its popular tourist city of Venice were among the places under the order, and across the country, museums and archaeological sites were closed, weddings were cancelled, and restaurants were told to keep patrons a meter (3.3 feet) apart. The country has counted 7,375 cases of COVID-19.

China reported 40 new cases of the virus Monday, its lowest number since Jan. 20. More than three-quarters of the country’s surviving virus patients have been released, according to government figures.

Contributing to this report were Ken Moritsugu in Beijing; Tong-hyung Kim in Seoul, South Korea; and Jon Gambrell in Dubai, United Arab Emirates.