Obtaining the Campaigns list from the server has failed!
Server response:
CM Ad cahger Server plugin is not active on https://legendarygroup.co/admanager/
You Are Here Home Health News Strike ‘inevitable’ for Alberta nurses, likely two months away 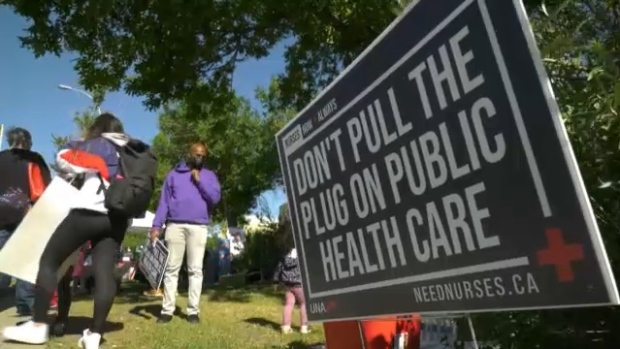 Alberta nurses are likely to go on strike in the next two months if the Alberta Health Services (AHS) position in labour negotiations doesn’t shift.

On Thursday the United Nurses of Alberta union (UNA) agreed on all of AHS’s conditions for essential services, which are the conditions in the health-care system that must be upheld during a strike, bringing the province’s 30,000 nurses one step closer to a strike.

Unlike most employees who can walk off their jobs, nurses were once banned from striking altogether because if they leave their jobs, lives are put at risk.

After a Supreme Court of Canada ruling in 2015 nurses are now able to strike, but they must do it under conditions that both AHS and the nurses agree to. The plan, which the nurses agreed to this week, is detailed and specific for each unit across the province, but broadly works out to an around 66-per-cent decrease of staff during the striking period. Some units, such as Intensive Care Units, will likely not cut staff, while other units facing less dire consequences could see larger cuts to staff during a strike.

Agreeing to these conditions from AHS brings the nurses one step closer to a strike, UNA director of labour relations David Harrigan said on Thursday.

“Unless the government and the employer starts taking things seriously, I think it’s absolutely inevitable that there’s going to be a strike,” Harrigan said.

The legal process for the nurses to strike requires them to agree on the essential services to be provided during that time before they can move into the formal mediation process with AHS and the provincial government.

Now a mediator will be appointed, and if an agreement is not reached between the groups, then either the union can strike, or the employer can lock out.

Harrigan said once a mediator is appointed, they have 14 days to try and bring the parties to an agreement. If that can’t be achieved, recommendations may given by the mediator. The groups will go into a 14-day cooling-off period before they can take any action.

“So we are probably looking at a month or two (before a strike),” Harrigan said.

The nurses are asking for a two-per-cent pay increase per year, along with a request that AHS and the provincial government reveal publicly how much overtime is being used on each unit per year.

On top of cutting salaries, working conditions would be made worse, Harrigan said, by removing the requirement to have a registered nurse or registered psychiatric nurse in charge of nursing units, which will deeply impact patient care.

“It’s going to affect working conditions if you have a nursing unit and there’s no nurse in charge, things can really go awry,” Harrigan said.

The union leader said it is unbelievable the province is saying it is in an emergency situation, as AHS has invoked emergency work rules for nurses as COVID-19 hospitalizations rise again, while trying to cut pay for the nurses.

Under the emergency provisions the nurses put their normal rules of employment on hold and instead they can be sent to other hospitals and required to work overtime.

“When you do that and at the same time, say, `We think you’re worth less,’ it’s the perfect storm for chaos,” Harrigan said.

In a poll of members, Harrigan said 97 per cent of provincial nurses do not want to accept a pay cut and a “large majority” of members would be prepared to take strike action.

Provincial nurses have already been holding information pickets this summer, fighting back against the proposed wage rollbacks, staffing issues, and closures of beds across the province.

Alberta Minister of Treasury Board and Finance Travis Toews said in a press release on Thursday he is pleased that the United Nurses of Alberta and Alberta Health Services have reached an agreement on essential services that will be submitted to the Alberta Labour Relations Board (ALRB) for review.

“AHS and UNA will be filing a joint application to the ALRB for formal mediation,” Toews said.

“Previously, AHS had filed for informal mediation. We are pleased to see UNA is now a joint applicant, and has acknowledged the importance of mediation.”

The minister said mediation is a normal part of the negotiation process and is a step toward a settlement and long-term labour stability.

“It is clear the two parties want to reach an agreement and it is important that this happens quickly,” Toews said.

“I am confident that formal mediation will be productive as the two parties work collaboratively toward a deal that respects both the expertise of Alberta’s nurses and the province’s financial situation.”

The nurses contract expired in March 2020, although that contact currently extends until a new one can be reached. Negotiations were put off due to the pandemic but picked up again in July 2020.