You Are Here Home Health News Support pours in for Sask. chief medical officer after protest outside his home 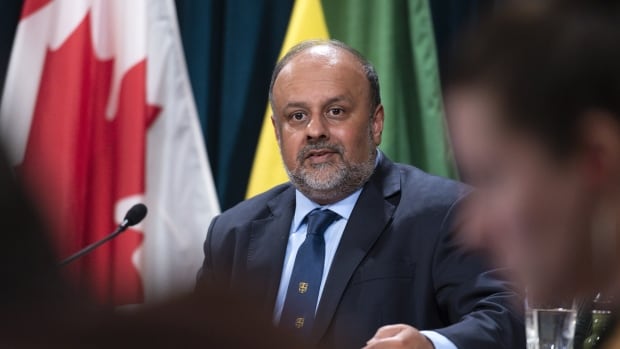 In a news release, police said they arrived at the residence shortly after 2:30 p.m. CST.

“Police monitored the situation and conducted an investigation until the protesters departed at approximately 3:30 p.m. Police will review the information gathered to determine if further action is required,” the release reads, in part.

Moe said the Regina Police Service and the RCMP are both involved to make sure Shahab and his family are safe. He said the government is looking into long-term security options to protect Shahab and his relatives.

Alec Couros, a professor of educational technology and media at the University of Regina, said the protest took things to a personal level against Shahab and called it “incredibly disturbing.”

How did it come to this

Couros said at this point, it’s bigger than Dr. Shahab, but everything starts small.

“This has been coming for a long time. This is related to QAnon, this is related to anti-masker protests that have happened. This is also related to the leadership or the lack thereof of our provincial system, our government, to provide clear and direct and concise information for the last ten months,” he said.

“If you fail to provide that direct and clear and concise information, you’re somewhat responsible for what happens and what grows and is nurtured in that vacuum.”

There was much confusion in the beginning of the pandemic — and responsibility for that doesn’t lie solely with the provincial government in Saskatchewan. Couros said inconsistent messages and what he called weak leadership at the World Health Organization contributed too.

In his response to the protest, Premier Scott Moe used the word “idiots” to describe the people there. Couros said that shame or ridicule doesn’t often work if you want people to engage in a dialogue with you and change their mind.

“You can think of the parallel of, for those people who are trying to get loved ones out of a cult for instance, they try to leave some sort of connection, leave a door open,” he said.

“When you outright ridicule people, there’s even less of a chance for these people to reconcile and to come closer to the truth.”

Earlier today, a group of idiots took their misguided protest to Dr. Shahab’s family home in Regina. This harassment of Dr. Shahab and his family at their home is simply unacceptable, sickening and wrong. (1/6)

There was a real outpouring of support for Shahab after the protest on Twitter. Several people condemned the protest and some used the hashtag #IStandWithShahab.

Dr. Shahab is a hero and I feel navigated this province (when the government and people listen to him) into preventative measures that saved lives. A line has been crossed and it needs to stop now. I hope in time we have a parade or appropriate tribute <a href=”https://twitter.com/hashtag/istandwithdrshahab?src=hash&amp;ref_src=twsrc%5Etfw”>#istandwithdrshahab</a> <a href=”https://t.co/hF78m7AFPo”>https://t.co/hF78m7AFPo</a>

I am appalled by the protestors who took to Dr. Shahab’s family home. <br><br>However I think we need to stop saying “this isn’t Saskatchewan”, as a province we are the sum of our people. <br><br>Let us instead realize racism &amp; extremism exists &amp; work to end it, not sweep it under the rug. <a href=”https://t.co/mLYABrWAN4″>pic.twitter.com/mLYABrWAN4</a>