You Are Here Home Health News ‘The gift anyone can give’: Ontario sets new record for organ donations and transplants 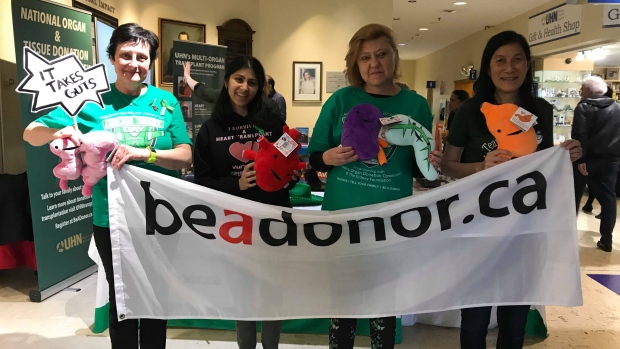 TORONTO — A record number of patients received organ transplants in Ontario last year, thanks to improvements in technology and medicines used in the life-saving procedures.

The province had 1,386 organ transplants and 684 deceased and living organ donors in 2019, according to the Trillium Gift of Life Network (TGLN). This provincial agency works with 69 hospitals across Ontario to process organ donations and tissue transplants.

The new record was set largely thanks to new initiatives and technologies, according to TGLN. Advancements in antiviral drugs have aided the surge in donations by giving potential donors with prior medical conditions the ability to donate their organs. These donors accounted for 21 per cent of organ transplants in 2019.

The president and CEO of TGLN, Ronnie Gavsie, told CTVNews.ca that the number of registered donors with hepatitis C grew by 41 per cent as compared to 2018.

“Antiviral drugs, in particular hepatitis C antiviral drugs, have enabled us to transplant organs which were in the past not suitable for transplant. These kinds of innovations have dramatically increased the number of lives saved,” said Gavsie in a telephone interview.

Gavsie said the communication between hospitals and TGLN has been more efficient in 2019 because of initiatives that involved staff on all levels. Medical supervisors known as hospital donations physicians work on call at the hospitals to educate staff on how to identify potential donors. These real-time updates are then reported to TGLN.

This system of reporting has resulted in 7,901 organ referrals and 33,585 tissue referrals in the province.

“While we’re thrilled with the increase in donor numbers, we still have a long wait list. All that we are asking of the general public is they register to consent. That is the gift anyone can give,” Gavsie said.

More than 1,600 people are on the wait list for a life-saving organ transplant in Ontario and every three days a Canadian will die before receiving a transplant, according to Gavsie. The longest wait time is often for a kidney transplant, at approximately two to five years. Someone in need of a heart transplant may wait up to six months.

Just over a year ago, 21-year-old Maariyah Rahman from Toronto was one of the people on the wait list. In December 2019 she celebrated her one-year anniversary of heart transplant surgery by donating $23,000 to the Toronto General Hospital, where she was a patient.

Rahman was diagnosed with heart failure in 2018 after she developed a cough that lasted for days — initially believed to be pneumonia.

After more complications, Rahman had to undergo open-heart surgery to have a biventricular assist device (BVID) inserted in her heart to help it function properly while she waited to receive a heart transplant.

On Dec. 17, 2018 Rahman was number one on the Canadian transplant list for a heart transplant. Fortunately, she got a match within a week and was scheduled for surgery on Christmas Eve 2018.

After a successful surgery Rahman slowly began transitioning back into her old life. The recovery process was not easy and Rahman had to spend weeks in cardiac rehabilitation at Centenary Hospital in Toronto.

“It was a really huge adjustment I had to make. I lost a lot of muscle and I couldn’t even walk up the stairs without help. Going from someone who is always busy and always active, it was really hard to adjust to taking it easy and not being able to do anything,” said Rahman.

Rahman said the support of her family is what helped her get through therapy and her journey inspired her family members to register to donate.

“It was funny because in my family I was the only who was actually registered to become a donor. While I was in surgery for my transplant, I have a huge family so there were about 50 of them in the waiting room and as they were waiting, they were registering to become organ donors,” said Rahman.

In December 2019, Rahman and her family hosted a gala to raise funds for the University Health Network’s (UHN) transplant program at Toronto General Hospital. They raised a total of $23,000.

“I felt that it was the perfect way to celebrate a year of healthiness and community by giving back to the institution that saved my life,” Rahman said.

Since her life-changing surgery Rahman became more involved in her community and received a grant from her university to start the Ryerson Gift of Life Project, an advocacy group for organ donations and transplants. She also volunteers at the UHN transplant program as a patient ambassador where she gets invited to speak to high school students across the city.

The Trillium Gift of Life Network reported that more than 4.2 million Ontarians have registered for organ and tissue donation. The agency says it’s important to register because families are less likely to provide consent on behalf of their loved one in the event of their death.

“Registration has a strong connection to donation,” TGLN said in a statement. “When a potential donor has formally registered to be an organ and tissue donor, families almost always proceed with donation. In the absence of registration, families only consent half the time.”