You Are Here Home Health News ‘The luckiest person in the world’: Doctor saves the same man’s life — twice 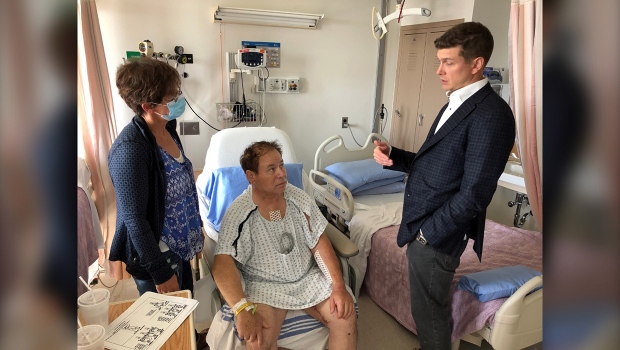 Sixty-year-old Parker was enjoying a hike with his family when he suddenly collapsed. He was having a heart attack.

Adams, a heart surgeon, was leaving the trail with his family when he heard the calls for help. He and his wife, who is also a doctor, immediately leapt into action.

“Darrell was passed out or unconscious on the side of the bank. We realized that he didn’t have a pulse and was actually at that time completely blue,” Adams said.

Adams, his wife, and another hiker performed CPR for the next 20 minutes until emergency response teams arrived with a defibrillator. At that point, they were able to get him “back into a normal rhythm,” Adams said.

While most stories would end there, these two men were surprised when just five days later, Adams had another opportunity to save Parker’s life.

Parker needed a quintuple bypass and was transferred to Foothills Medical Centre in Calgary — the hospital where Adams works.

“I went to go see Darryl and his family, because we had met at the scene. His wife and son recognized me and they asked if I would do his heart surgery,” Adams said.

“It just kind of completed the whole circle.”

Following the heart surgery Adams performed, Parker is expected to make a full recovery. He said the whole incident made him feel like the “luckiest person in the world.”

“Sometimes things work out for us and I can’t be happier that it did,” Parker said. “I think there’s definitely more to it than what we actually see.”

According to Adams, Parker is very lucky — as cardiac arrests that occur outside of hospitals are often fatal.

But for Parker, everything did go right, and Adams was there to see it through from beginning to end. For the doctor, the moment was “career fulfilling.”

“It lets you know that all the years of work, and even that weekend Saturday CPR course, is really worth it. You can really make a difference,” Adams said.

Parker hopes to return to the site of his heart attack for another hike next summer.

When that happens, Adams said he’d consider joining him.