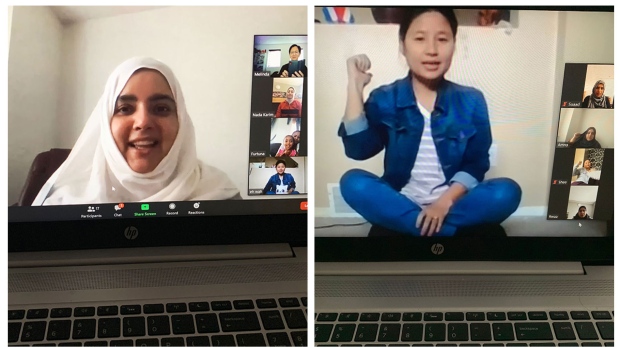 TORONTO — A Winnipeg-based non-profit wanted to help newcomers tackle their increased anxiety, stress and mental health issues directly because of the pandemic.

So now, Mosaic Newcomer Family Resource Network will act as a liaison for newcomers to virtually connect with trained social workers, and help break down the stigmas towards mental health some families may have.

“Arriving during a pandemic is extremely disorienting for many, many families,” Shereen Denetto, director of family programs for the non-profit organization, told CTVNews.ca in a phone interview.

Her group regularly works with newcomer families from all over the world, including some from Eritrea in northeast Africa and Myanmar, with many of them fleeing violence or persecution.

“Instead of starting a new life full of promise here, you are in yet another crisis,” she said. For example, Denetto noted in Winnipeg, “everything was shut down, the place looked like a ghost town… I think it was quite anxiety-provoking to land in that setting.”

Denetto acknowledged the families she works are very resilient, with some leaning on their past experiences with crises to deal with the pandemic now. But that trait isn’t a substitute for actual mental health support, so she said program was specifically created “in light of the [heightened] stress and anxiety that many newcomer families have been facing during the pandemic.”

In a phone interview with CTVNews.ca, Amna Burki, a former immigrant from Pakistan who helps runs the group’s initiatives, said “for families, especially when they’re coming from war zones, this feels like a new war zone to them.” She said some newcomers have likened the virus to an enemy they can’t see but know is there.

Burki, who regularly interacts with the families virtually, said for many families, the group has become a stand-in for the family members that newcomers left behind. And because of this closeness, they can easing newcomers towards receiving mental health supports if they need it.

She said addressing mental health and other concerns early on “takes a lot of the pressure off the system [down the line], when people get to a level when they’re not able to cope.”

One refugee and mental health expert, who wasn’t involved in the program, said that language classes, parenting, employment and life-skills groups are perfect forums to introduce mental health supports in a safe space.

“Integrating community-based mental health programming into settlement services increases access and reduces stigma,” according to Sharalyn Jordan, an associate professor of education at Simon Fraser University in Vancouver, whose research examines the overlap between refugee protection, settlement, and mental health.

She said for newcomers, the “uncertainty of their futures increases anxiety.” And this feeling is only exasperated by this group being more likely to live in shared or crowded housing; not having consistent healthcare provider; working multiple jobs; and working nights and odd hours under hard conditions with no sick days.

“The realities in Canada for newcomers often do not meet hopes and expectations,” she said. “Discrimination and racism make finding housing, work and getting around stressful.”

“Mild to moderate depression and anxiety mixed with trauma responses is very common [but] with support, people can recover. But in isolation, these problems magnify and become quite serious,” she said. She also noted her concern for newcomers in general at having a heightened risk of suicide or seeing an increase in crisis calls for family violence — an observation in line with similar trends for the general population in Canada.

But even still, a lack of funding for mental health initiatives is a regular hurdle for many organizations in Canada, according to Jordan, who is a board member of Rainbow Refugee, a Vancouver-based group supporting LGBTQ+ people seeking refugee protection.

“Mental health supports should be integral to settlement supports, but, all too often, they are separate or left out altogether because of funding restrictions,” she explained. “Settlement funding typically comes from federal sources and with some exceptions, mental health is a provincial jurisdiction [and] newcomer mental health falls between these gaps.”

CTV News is a part of Bell Media, whose parent company is BCE.