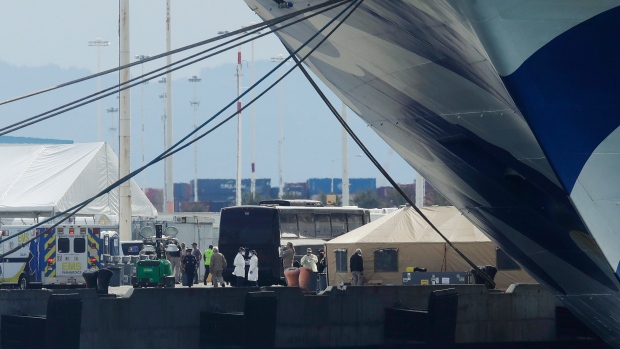 OAKLAND, CALIF. — Thousands of passengers aboard a cruise ship struck by the coronavirus waited anxiously Tuesday for their turn to leave the vessel, even if it meant being shipped to military bases for weeks of quarantine.

After days of being forced to idle off the Northern California coast, the Grand Princess docked Monday at the Port of Oakland with some 3,500 passengers and crew on board.

“We’re trying to stay calm and were trying to stay positive but it’s getting harder and harder. They can’t make up their minds how to keep us safe,” said Beryl Ward, 77, of Santa Fe, New Mexico.

About two dozen people who need acute medical care were taken off the ship, although it wasn’t clear how many had tested positive for the new virus, said Brian Ferguson, a spokesman for the California Office of Emergency Services.

Many of the nearly 240 Canadians on board left the ship after the critically ill and stood outside two tents displaying Canadian flags. Canada and the UK were among the countries sending chartered flights to retrieve their citizens.

But some 2,000 passengers, including hundreds of Californians, were still aboard by the time disembarkation ended Monday night. It was to resume Tuesday morning, the captain told passengers.

For days, passengers aboard the ship had been isolated in their cabins. When they were finally allowed a few minutes on deck, she said, they were warned to wear masks and try to stay 6 feet (1`.8 metres) away from each other.

“The president didn’t even want us to get off the ship. So that didn’t make me happy,” Ward said. “Wish you were here, Mr. Trump!”

Ward’s cabin mate, Carolyn Wright, 63, also of Santa Fe, could look out of her cabin window as passengers lined up. Around them, she noted, were people in yellow protective clothing, gloves and even a few hazardous materials suits.

But after docking, video showed long lines forming for the processing tents. Ambulances were on hand to take some passengers away.

“They were queuing up the passengers like cattle,” Wright said. “Everybody was bunched up. They were physically touching each other and they were backed up along the gangplank.” Then, she said, they were taken away in chartered buses.

“I’m just totally freaked out by that,” said Wright. “It’s outrageous. If that’s safe, then why were we stuck in our rooms? It’s been stressed for the past five days that we’re not to have any contact with any other passengers?”

On Sunday, before the ship docked, Dr. John Redd of the U.S. Department of Health and Human Services had urged passengers to remain in their rooms and said: “We’re making every effort to get them off the ship as safely and quickly as possible.”

He called the elaborate but quickly planned disembarkation process a “really unprecedented and difficult operation.”

The Grand Princess had been held off the coast since Wednesday because of evidence that it was the breeding ground for more than 20 infections tied to a previous voyage.

U.S. passengers will be flown or bused from the port — chosen for its proximity to an airport and a military base — to bases in California, Texas and Georgia for testing and a 14-day quarantine. Some arrived Monday night at Travis Air Force Base in Northern California. The ship carried people from 54 countries, and foreigners were to be whisked home.

But Wright and others said nobody had been told the details. Only about 50 people had been tested for the virus.

“I’m willing to be quarantined,” Wright said. “‘But I want to know if I’m positive or not. We don’t even know if we’re going to get tested. It’s all rumour and speculation.”

“I’m bored and frustrated,” she added. “All of a sudden a two-week vacation has turned into a five-week vacation.” Passengers need to worry about who is looking after their children or pets, not to mention preparing their taxes before the deadline and earning a living. A professional photographer, she was looking at five weeks without earning a salary.

About 1,100 crew members, 19 of whom have tested positive for COVID-19, the disease caused by the virus, will be quarantined and treated aboard the ship, which will dock elsewhere after passengers are unloaded, California Gov. Gavin Newsom has said.

The California governor and Oakland mayor sought to reassure people that none of the cruise ship passengers would be exposed to the public before completing the quarantine. Officials were trying to decide where the ship and its crew would go next.

Cruise ships have come under scrutiny by those who view them as potential germ factories because they pack thousands of people in close quarters.

Another Princess ship, the Diamond Princess, was quarantined for two weeks in Yokohama, Japan, last month because of the virus. Ultimately, about 700 of the 3,700 people aboard became infected in what experts pronounced a public health failure.

A third vessel, the Caribbean Princess, was supposed to dock in Grand Cayman on Monday but the cruise line said it will keep its thousands of passengers and crews from disembarking until crew members are tested for COVID-19.

Around the world, nations have limited the movements of millions of people in an effort to stop the spread of COVID-19. Italy was to impose travel restrictions and other strict public health measures nationwide starting Tuesday.

In Northern California, Santa Clara County announced a ban of all large gatherings of at least 1,000 people for the rest of the month in response to the coronavirus outbreak. The announcement Monday came hours after the public health department announced the county’s first coronavirus death, a woman in her 60s.

The virus has shaken global markets, with stocks taking their worst one-day beating on Wall Street since 2008 and oil prices suffering their most brutal losses since the start of the 1991 Gulf War. Even with Asian markets posting modest gains Tuesday, fear was rampant that economies stood at the brink of recession.

For most people, the new coronavirus causes only mild or moderate symptoms, such as fever and cough. For some, especially older adults and people with existing health problems, it can cause more severe illness, including pneumonia.

According to the World Health Organization, people with mild illness recover in about two weeks, while those with more severe illness may take three to six weeks to recover. In mainland China, where the virus first exploded, more than 80,000 people have been diagnosed and more than 58,000 have so far recovered.

The virus has infected 600 people in the United States, and at least 26 have died, most in Washington state. Surgeon General Jerome Adams said communities will need to start thinking about cancelling large gatherings, closing schools and letting more employees work from home, as many companies have done after an outbreak in the Seattle area.

Pearl Jam on Monday announced it was postponing 17 North American shows on its upcoming tour over coronavirus concerns.

In Silicon Valley, NASA’s Ames Research Center is essentially closed with restricted access because an employee tested positive Sunday for the coronavirus. Workers will be on “mandatory telework status” and three earth science airplane missions are being delayed to later this year, the county said.

Several universities have begun online-only courses, including the University of Washington, Stanford University and Columbia University.

The Associated Press receives support for health and science coverage from the Howard Hughes Medical Institute’s Department of Science Education. The AP is solely responsible for all content

This story has been corrected to identify an Offices of Emergency Services spokesman as Brian Ferguson.

Clumsy kids can be fit too