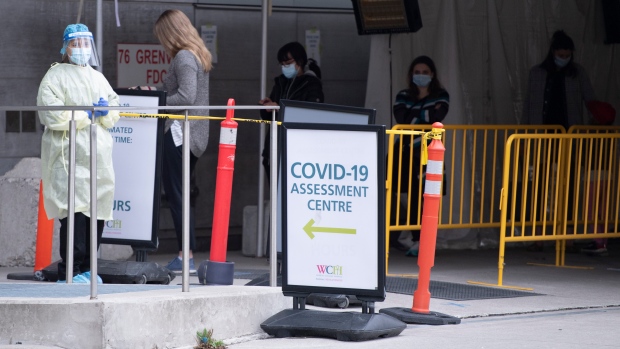 TORONTO — Toronto’s top doctor says that at the current rate of transmission the city could see 2,500 new COVID-19 cases per day by the end of April.

Chief medical officer of health Dr. Eileen de Villa says the surging rates are being driven by more transmissible variants of concern in the community.

De Villa says the current record for daily cases in Toronto is 1,642 and was set during the second wave of the pandemic.

She says the city is vaccinating more people against the virus but that still won’t be enough to offset the impact of the variants.

De Villa says people are moving less since the new stay-at-home order has come into effect, but not in every part of the city.

Overall, the province is reporting 4,401 new cases of COVID-19 today, and 15 new deaths due to the virus.

The province said it has conducted 47,929 tests since the last daily report.

In total, 1,646 people are hospitalized in Ontario due to COVID-19, including 619 in intensive care, and 408 people are on ventilators.

Ontario has administered 74,722 doses of the vaccine since its last daily update, with 3,214,465 vaccines given in total.

Meanwhile, hospitals in the province started ramping down elective surgeries and non-urgent procedures Monday to ensure they have the capacity to treat more COVID-19 patients.

Hospitals in northern Ontario are exempt from cancelling non-urgent procedures but a memo from Ontario Health last week said they should prepare to ramp down quickly in the near future.

The memo also asked hospitals to identify staff who may be redeployed to other sites if necessary.

The announcement comes on the first day of a postponed spring break for schools.

Ford said last week that education workers who live or are employed in hot spot neighbourhoods in Toronto and Peel Region will be eligible for vaccines starting this week, with plans to expand to other hard-hit areas as supply allows.

The government is also expanding availability of the Oxford-AstraZeneca vaccine to people aged 55 and over this week.

An additional 700 pharmacies are now offering the vaccine, and another 100 pharmacies will join the immunization campaign by the end of April.

Toronto residents born in 1961 or earlier, or who are at least 50 years old and live in a hot spot neighbourhood, can book a shot at one of the city-run clinics by phone or internet.

Officials say 758,882 doses of a COVID-19 vaccine have been administered in Toronto so far.

This report by The Canadian Press was first published April 12, 2021.