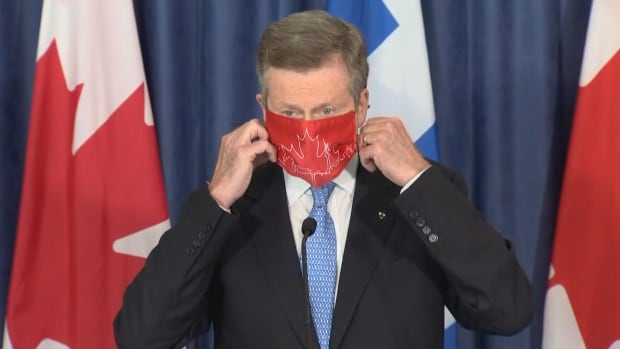 Toronto’s mayor and medical officer of health want non-medical masks and face coverings to be made mandatory in indoor public spaces to help limit the spread of COVID-19.

“It is about respecting and protecting each other,” Mayor John Tory said at a morning news conference, adding that it will be a key element to reopening the city safely

“We hope there are more and more people out in the stores and in the businesses across the city. We want that to happen for the sake of our economy and for the sake of returning to a nearer to normal kind of life,” Tory said.

The recommendation is included in a report from Toronto’s medical officer of health, Dr. Eileen de Villa, that will go to council later today. Tory said he expects council to move ahead with the policy by implementing a temporary by-law.

We know we are at a critical time in the fight against COVID-19, and that we must do everything we can to avoid the flare ups that we’ve seen in other places.– Toronto Mayor John Tory

“Our doctor says that it works,” Tory added.

If the recommendation is adopted, the rule would take effect one week from today, to roughly align with when they also become mandatory on public transit in the city. But de Villa and Tory encouraged anyone who has access to a cloth mask to begin wearing one right away.

They also noted that “suitable” exceptions will be made for anyone who cannot wear a mask for medical reasons, as well as for children under two years old.

Masks have worked to help curb the spread of COVID-19 in other jurisdictions in which residents consistently wear them, and that a mandatory mask rule results in higher uptake.

Toronto’s policy would remain in place until at least September, timed around a city council meeting so the order could be extended if deemed necessary, Tory said.

“We know we are at a critical time in the fight against COVID-19, and that we must do everything we can to avoid the flare ups that we’ve seen in other places,” said Tory.

Saying it’s about ‘respecting and protecting each other,’ Toronto Mayor John Tory said he will support making masks mandatory for indoor public spaces in the city. 2:35

The news comes one day after a call from mayors throughout the Greater Toronto and Hamilton Area for a mandatory mask policy across Ontario was rejected by Premier Doug Ford’s government.

Ford has repeatedly said that he believes such a policy would be impossible to enforce, and that his government trusts people to make responsible decisions when they leave their homes. The province has opted instead for a policy of strongly encouraging the public to wear non-medical masks and face coverings in busy indoor spaces.

A spokesperson for Ontario’s Ministry of Health, however, pointed out that local medical officers of health have the power to implement face mask policies in their respective health regions under existing legislation, namely Section 22 of the Health Protection and Promotion Act.

Tory said that there would not be any “aggressive enforcement” of the mask by-law in Toronto, but he hopes that residents will wear them because “it is the right thing to do.”

Asked about online videos capturing confrontations over masks at grocery stores and businesses in the United States, Tory said he believes that people opposed to wearing a face covering represent a “tiny, tiny minority.”

Meanwhile, the city of Kingston, Ont., has already made mask use mandatory for workers and customers at many indoor public locations following an outbreak of COVID-19 at a local nail salon.