You Are Here Home Health News Travellers returning to Canada will soon have to quarantine in hotels, at their own cost: sources 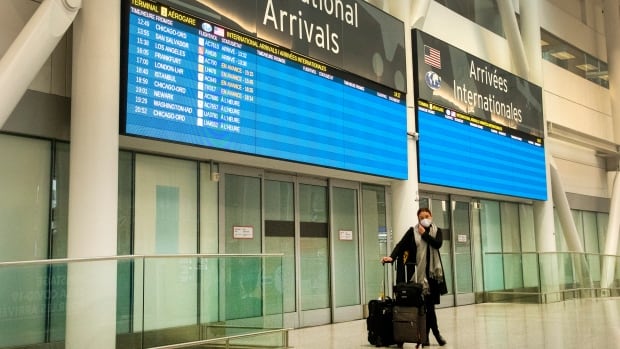 Travellers entering Canada will soon have to quarantine in a hotel — at their own expense — as the federal government introduces tougher restrictions to discourage international travel.

It’s not yet clear how long people will have to stay in the hotels, when the measures will kick in or what the cost will be.

Trudeau is expected to announce more details during a media conference outside his home at Rideau Cottage in Ottawa at 11:30 a.m. ET.

News of the new costly measures was first reported by the National Post and The Canadian Press.

Quebec Premier Francois Legault has been urging the federal government to make anyone returning from abroad quarantine for two weeks in a hotel, at their own expense.

Trudeau hinted earlier this week that the government was working “carefully and diligently” on new measures.

The move is not without precedent. Australia has been requiring most travellers to quarantine at a government-arranged hotel for 14 days for $2,800 AUD per adult and $4,620 AUD for a family of four.

The U.K. introduced similar measures on Thursday and now requires citizens arriving from dozens of high-risk countries to quarantine in hotels for 10 days at their own expense.

Canada has had a ban on non-essential travel into the country by anyone who isn’t a citizen or permanent resident since March, but banning the flow of Canadians in and out of the country is a thornier task.

People who return from abroad for non-essential reasons must quarantine for two weeks, or risk hefty financial penalties or jail time — a measure that’s also been in place since March.

As of earlier this month, most travellers must also show proof of a negative COVID-19 test before arriving in Canada.