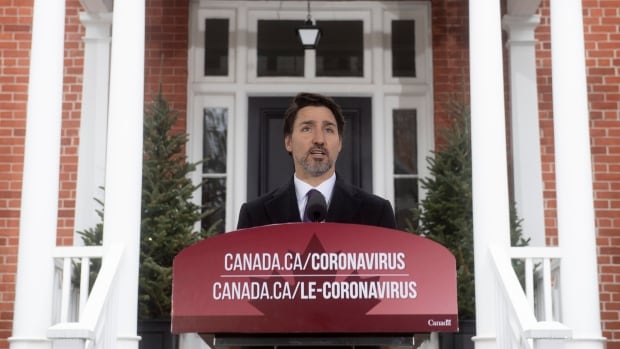 Prime Minister Justin Trudeau will address the country for the seventh day in a row amid pleas for Canadians to hunker down to slow the spread of COVID-19.

Trudeau is expected to address the return of Parliament in a speech around 11:15 a.m. ET. CBC News will carry his address live.

Just minutes before he took to the podium outside of Rideau Cottage, where he’s been in self-isolation after his wife  tested posted for the novel coronavirus, the Speaker’s office confirmed the House of Commons will be recalled Tuesday.

A smaller-than-normal number of MPs will be called back to adopt emergency measures announced earlier this week by the federal government that are intended to offset the economic impact of the COVID-19 pandemic.

The Senate will be called back Wednesday to pass the bill. Royal Assent is expected the same day, Radio-Canada has learned.

The measures focus on improving access to employment insurance and increasing the Canada Child Benefit.

To respect social distancing guidelines, a limited number of MPs will be present in the chamber.

Just over 30 MPs are expected to sit, including 14-15 Liberals, 11 Conservatives, three members of the Bloc Québécois, three New Democrats and one member of the Green Party.

Health Minister Patty Hajdu gave a stern warning to Canadians defying self-isolation orders on Saturday, saying that a failure to follow public health guidelines to limit the spread of COVID-19 could “put our civil liberties in jeopardy.”

Police in that province can now issue summary offence tickets for people who are not adhering to orders related to self-isolation and social distancing.

Trudeau is also expected to give an update on Canada’s repatriation efforts.

On Saturday Trudeau said the government is doing all it can to help bring home Canadians who are stranded abroad due to COVID-19 travel clampdowns, but conceded it won’t be able to help everyone.

Statin use associated with increased survival in severe COVID-19

Coronavirus: What’s happening in Canada and around the world on March 1

Why Canada’s pandemic experience has been easier than some