A feverish and fatigued U.S. President Donald Trump was spending the weekend at a military hospital for treatment of COVID-19, as new cases continued to emerge among some of the president’s top advisers and allies.

“This morning the president is doing very well,” Trump’s physician, Navy Commander Dr. Sean Conley, told reporters on Saturday as he stood with nine doctors and nurses outside the hospital to give an update on the president’s condition.

Conley said Trump had a mild cough, nasal congestion and fever, which are all “doing better.” He said Trump has been feeling “rundown” but has been “fever-free” for the last 24 hours.

“The team and I are extremely happy with the progress the president has made,” Conley said.

Trump’s medical team said he is not on oxygen or taking hydroxychloroquine, a malaria drug once touted by the president.

In a memo released shortly before midnight, Conley reported that Trump had been treated in hospital with remdesivir, an antiviral medication, after taking another experimental drug at the White House. He added that Trump is “doing very well” and is “not requiring any supplemental oxygen.”

A member of his medical team said Trump was expected to stay on remdesivir for five days.

The White House said Trump was expected to stay at the Walter Reed National Military Medical Center in Bethesda, Md., near Washington, for “a few days” out of an abundance of caution and that he would continue to work from the hospital’s presidential suite, which is equipped to allow him to keep up his official duties. 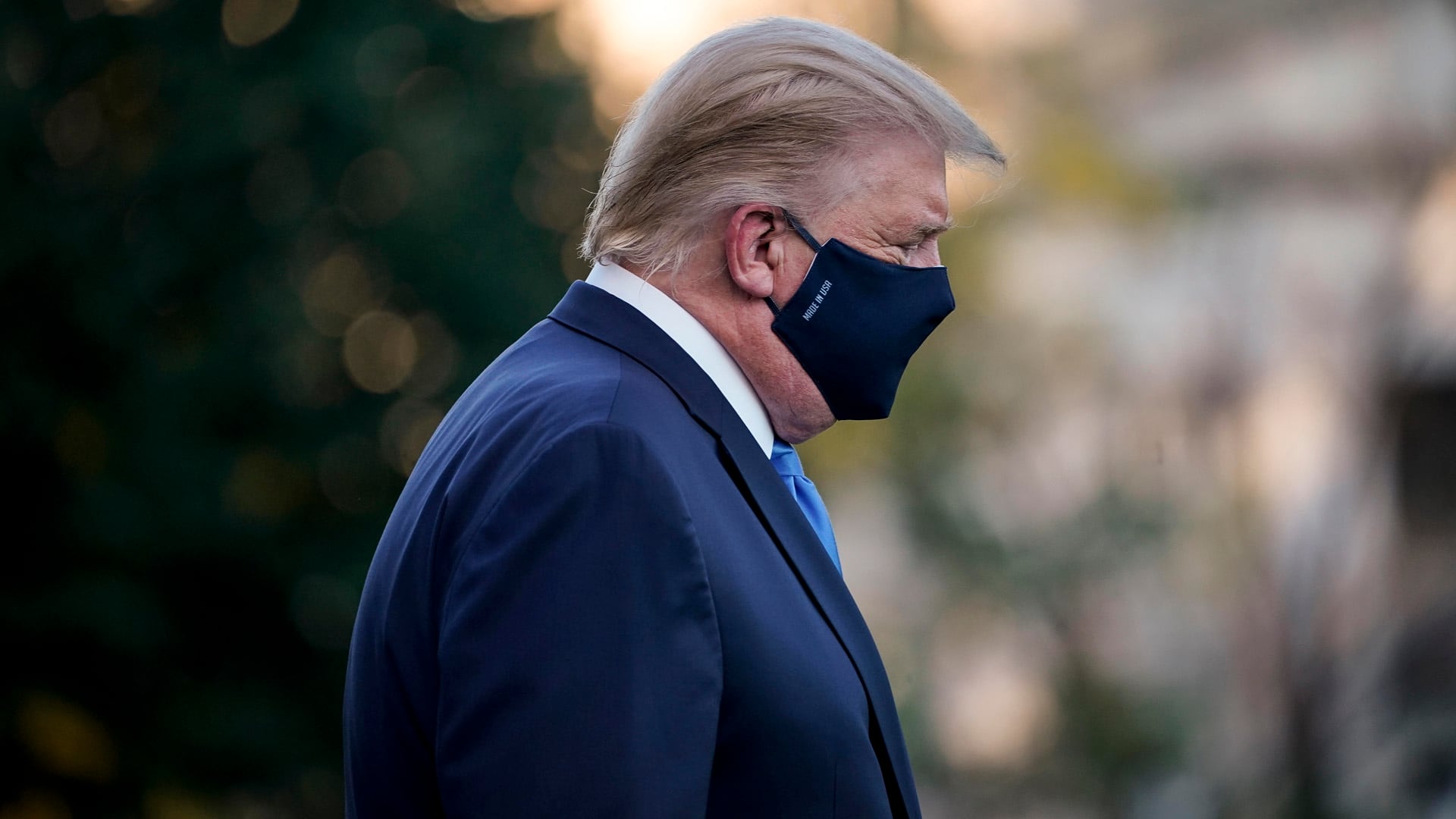 U.S. President Donald Trump has been given the antiviral drug remdesivir and an experimental antibody cocktail. Trump was taken to Walter Reed hospital Friday after showing symptoms of COVID-19. 6:32

In addition to accessibility to tests and equipment, the decision to send Trump to the hospital was made, at least in part, with the understanding that moving him later, if he took a turn for the worse, could send a worrying signal.

Though the ceremony announcing Judge Amy Coney Barrett’s nomination was held outdoors, more than 150 attendees sat together in the Rose Garden and few wore masks. Some also mingled at a smaller event inside the White House.

The decision for Trump to leave the White House for the hospital capped a day of whipsaw events on Friday. The president, who has previously played down the threat of the virus, was forced to cancel all campaign events a month before the Nov. 3 election as he fought a virus that has killed more than 205,000 Americans and is hitting others in his orbit as well.

Trump walked out of the White House on Friday evening wearing a mask and gave a thumbs-up to reporters but did not speak before boarding Marine One. Members of the aircrew, Secret Service agents and White House staff wore face coverings to protect themselves from the president on board the helicopter.

In a video taped before leaving for Walter Reed, Trump said, “I think I’m doing very well, but we’re going to make sure that things work out.” He remained fully president, all authority intact.

“Going welI, I think! Thank you to all. LOVE!!!” he wrote in his first tweet from the hospital Friday night.

Trump first revealed that he had tested positive in a tweet about 1 a.m. Friday — hours after he returned from a Thursday afternoon political fundraiser. He had gone ahead to the event, saying nothing to the crowd though knowing he had been exposed to an aide with the disease that has infected millions in America and killed more than one million people worldwide.

First lady Melania Trump also tested positive and has said she has mild symptoms. She is believed to be isolating at the White House.

On Saturday, Sen. Ron Johnson of Wisconsin became the third Senate Republican to publicly confirm testing positive in the current spate of infections, although Johnson was not at last week’s Rose Garden event.

Trump’s diagnosis came during an already turbulent period in Washington and around the world, with the U.S. gripped in a heated presidential election and the pandemic taking a heavy human and economic toll. Trump’s immediate campaign events were all cancelled, and his next debate with Democratic rival Joe Biden, scheduled for Oct. 15, is now in question.

Trump has been trying all year — and as recently as Wednesday — to convince the American public that the worst of the pandemic is past, and he has consistently played down concerns about being personally vulnerable. He has mostly refused to abide by basic public health guidelines — including those issued by his own administration — such as wearing face coverings in public and practising physical distancing. Until he tested positive, he continued to hold campaign rallies that drew thousands of often maskless supporters.

“I felt no vulnerability whatsoever,” he told reporters back in May. With the election coming up in a month, he is urging states and cities to “reopen” and reduce or eliminate shutdown rules despite continuing virus outbreaks.

The White House tried to maintain an atmosphere of business-as-usual on Friday. 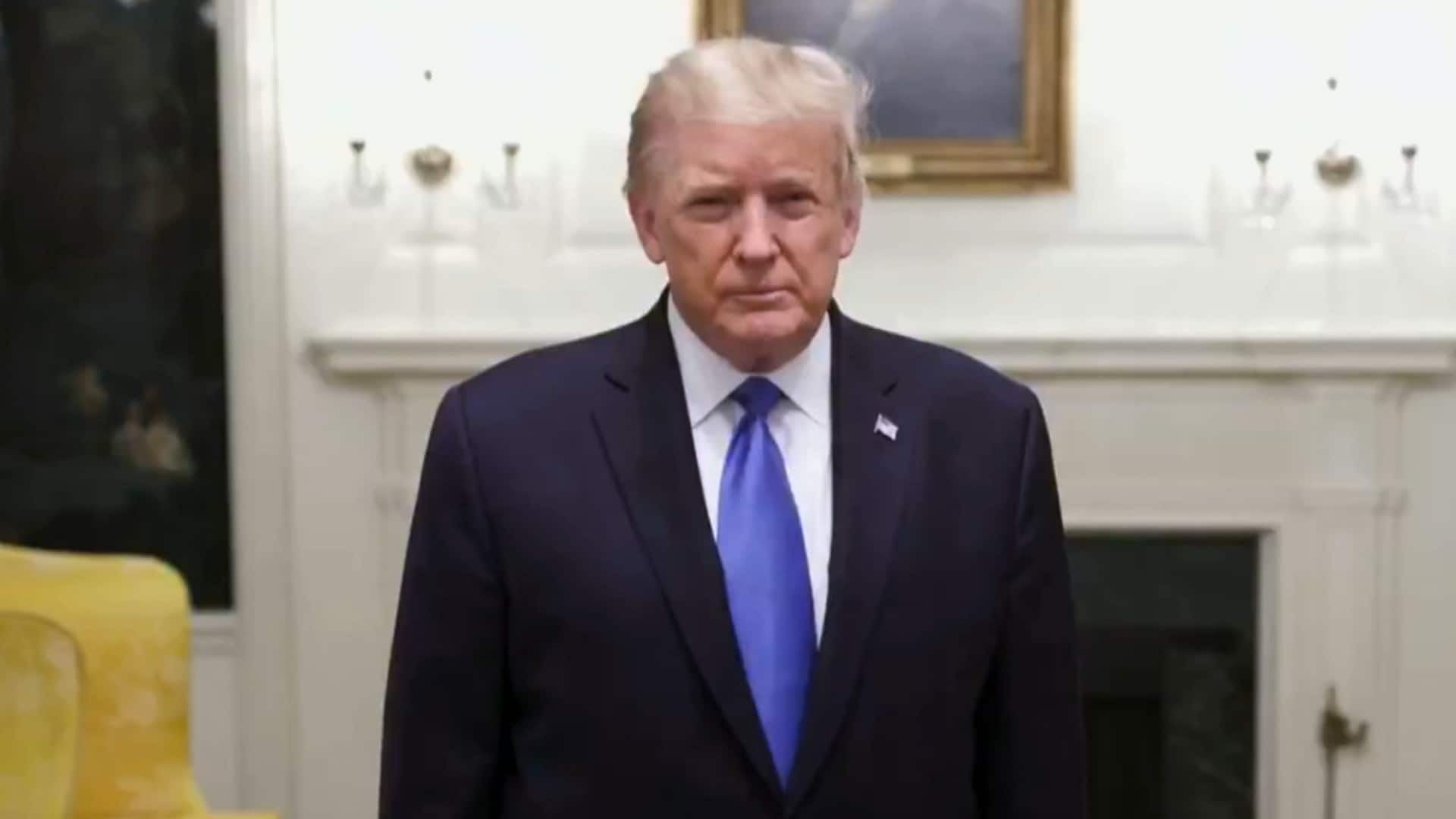 U.S. President Donald Trump says in Twitter video that he thinks he’s doing well after he and his wife tested positive for COVID-19. 0:18

“President Trump remains in good spirts, has mild symptoms, and has been working throughout the day,” said press secretary Kayleigh McEnany. “Out of an abundance of caution, and at the recommendation of his physician and medical experts, the president will be working from the presidential offices at Walter Reed for the next few days.”

The president’s physician said in a memo that Trump received a dose of an experimental antibody combination by Regeneron that is in clinical trials. Conley said Trump “remains fatigued but in good spirits” and that a team of experts was evaluating both the president and first lady in regard to next steps.

Late Friday, Conley issued an update that said Trump is “doing very well” and is “not requiring any supplemental oxygen.” But he said that, “in consultation with specialists we have elected to initiate remdesivir therapy,” an antiviral medication.

“He has completed his first dose and is resting comfortably,” the doctor wrote.

The president’s wife, who is 50, has a “mild cough and headache,” Conley reported, and the remainder of the first family, including the Trumps’ son Barron, who lives at the White House, tested negative.

Trump is 74 years old and clinically obese, putting him at higher risk of serious complications from a virus that has infected more than seven million people nationwide.

Both Biden and his running mate, Kamala Harris, have tested negative, their campaign said. Vice-President Mike Pence tested negative for the virus Friday morning and “remains in good health,” his spokesperson said. Pence was to resume his campaign schedule after his test.

Judge Barrett, who was with Trump and many others last Saturday and has been at a Capitol Hill meeting with lawmakers, also tested negative, the White House said. It was confirmed that she had a mild case of COVID-19 earlier this year and has now recovered.

Many White House and senior administration officials were undergoing tests, but the full scale of the outbreak around the president may not be known for some time, as it can take days for an infection to be detectable by a test. Officials with the White House Medical Unit were tracing the president’s contacts.

Trump’s handling of the pandemic has already been a flashpoint in his race against Biden, who spent much of the summer off the campaign trail and at his home in Delaware, citing concern about the virus. Biden has since resumed a more active campaign schedule, but with small, physically distanced crowds. He also regularly wears a mask in public, something Trump mocked him for at Tuesday night’s debate.

“I don’t wear masks like him,” Trump said. “Every time you see him, he’s got a mask. He could be speaking 200 feet away from me, and he shows up with the biggest mask I’ve ever seen.”