You Are Here Home Health News U.K. COVID-19 variant on way to dominate cases in Toronto-area by end of February, study finds 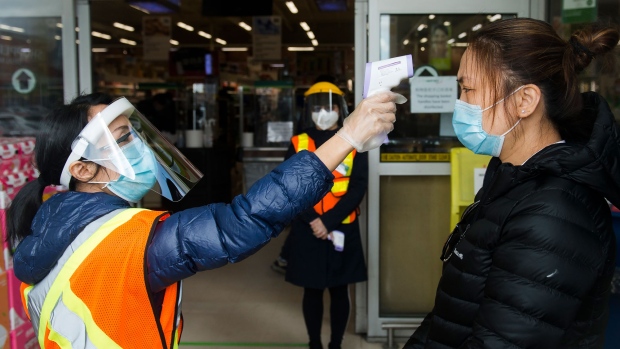 TORONTO — A study of select COVID-19 cases in the Toronto-area found the highly infectious B.1.1.7 variant accelerated its spread “10-fold” during the month of January and is well on its way to dominate all known positive samples in the region before the end of February.

They looked for the absence of a specific spike protein in each virus sample that signifies mutations often associated with variants of concern, known as the S-Gene drop or S-Gene Target Failure (SGTF).

They found 448 specimens that displayed SGTF, or 3.9 per cent of all samples.

Fifty-nine of those samples were then run through complete Whole Genomic Sequencing (WGS), with six samples collected in Dec. 2020 and the rest from Jan. 2021.

Two of the six Dec. 2020 samples analyzed were confirmed to be the B.1.1.7 coronavirus variant, while 51 of the 53 samples from Jan. 2021 came back positive, indicating that S-Gene Target failure is an extremely reliable predictor of the presence of a variant of concern.

By the start of February, the study found that 15 per cent of all positive samples passing through Dynacare laboratories in the GTA were coming back with S-Gene Target Failure, representing a “10-fold monthly increase” that could mean the B.1.1.7 and other variants could become dominant in the GTA before the end of the month.

“This detection of a sample’s gene target failure – this is a pretty reliable way of knowing whether you’ve got something problematic or not,”one of the study’s authors, Dr. Kevin Brown, told CP24.

Previous modelling by provincial experts has warned that should the B.1.1.7 variant become dominant, Ontario would see severe spikes in COVID-19 cases, requiring deep and frustrating public health restrictions in order to curb.

There are nearly 400 cases of the B.1.1.7 variant now confirmed in the province through whole genomic sequencing, with several hundred more “highly probable” cases awaiting complete confirmation.

Brown said the public has to remain confident that public health measures can keep the decline going, as they have in other regions dealing with variants of concern.

“It’s not destiny – we’re completely in control of this spread of COVID-19 in the province including with B.1.1.7.”

But the data suggests allowing indoor dining, non-essential retail and indoor fitness activity in most of the province at the same time schools have reopened may be unwise.

Brown’s study found that samples with S-Gene Target Failure had a reproduction number of 1.17, meaning every 100 people infected with it would on average go on to infect another 117 people.

But among “wild” strain, non-variant samples collected during the study, the reproduction number was only 0.82, meaning every 100 people infected with it would go on to infect 82 people.

“There is a good news story which is you know that our measures in place are highly effective at controlling non-B.1.1.7 strains in the province. But there’s also this, you know, this other story where there’s a pandemic of B.1.1.7 that’s occurring where B.1.1.7 is expanding even though the non-B.1.1.7 strains are coming under control.”

During most of the time the study was conducted, the GTA was under a lockdown and stay-at-home order, with all but the most essential retailers shut and all schools closed.

The head of Ontario’s COVID-19 Science Advisory Table said earlier this month that reopening anything beyond schools could lead to exponential growth in cases in March.

“Of course, it’s concerning,” Brown said when asked about the variant’s spread even during a period of intense restrictions.

He said Ontario should mimic what has been done in several European countries such as the United Kingdom, Ireland and Denmark to curtail the spread of B.1.1.7.

“We should be looking for ways to kind of increasing public health measures, reduce the number of contacts per person and enhance masking and social distancing – those types of measures.”

On Friday, Brown’s employer, Public Health Ontario, released a detailed cross-comparison of measures currently in place in Ireland, the UK and Denmark.

All three of those jurisdictions have closed some or all public schools, shut down non-essential retail, restricted indoor dining and closed indoor fitness facilities.

Two of those jurisdictions, the UK and Ireland, have outright population mobility restrictions, limiting people’s travel between municipalities.

By Monday, in 31 of Ontario 34’s public health regions, all schools, gyms, restaurants and non-essential retailers will be allowed to open. People are encouraged to limit non-essential travel between regions but there is no actual rule preventing them from doing so.

Also last Friday, the body representing all 34 municipal chief medical officers of health in Ontario urged the Ford government to delay its return to a five-tier, colour coded reopening framework, which will allow greater person-to-person interaction in all but Toronto, Peel Region and North Bay-Parry Sound.

“Our members, who are on the front lines of the public health response to the COVID-19 pandemic in Ontario, therefore have serious concerns about the increased mobility, more frequent interpersonal contacts, and consequent potential exposures to COVID-19 that will accompany a return to the progressive categories under the Response Framework at this time,” a letter from the Association of Local Public Health Agencies (ALPHA) sent to Premier Doug Ford on Friday read.

Brown said they did not have conclusive proof through what was collected of earlier B.1.1.7 cases.

“It’s hard to know exactly – like there could very well have been but we don’t have the data to conclusively recommend something.”

Asked about the possibility of B.1.1.7 circulating in Ontario earlier than Dec. 26, 2020, Chief Medical Officer of Health Dr. David Williams said it was a “logical conclusion.”

“Our lab data did not identify it sooner although we were looking for it,” Dr. Williams said Thursday. “I think it is a logical conclusion that it was circulating before the holidays.”