U.S. President Donald Trump said Friday that he and his wife, Melania Trump, have tested positive for the coronavirus, just a month before the presidential election and after having spent much of the last year largely downplaying the threat of the virus.

Trump’s positive test came just hours after he confirmed that senior aide Hope Hicks, who had travelled with him several times this week, had come down with the virus. Trump was last seen by reporters returning to the White House on Thursday evening and looked to be in good health.

Trump is 74 years old, putting him at higher risk of serious complications from a virus that has now killed more than 205,000 people in the U.S.

“Tonight, (at)FLOTUS and I tested positive for COVID-19. We will begin our quarantine and recovery process immediately. We will get through this TOGETHER!” Trump tweeted.

In a memorandum, the president’s physician said that Trump and his wife, who is 50, “are both well at this time” and “plan to remain at home within the White House during their convalescence.”

“Rest assured I expect the president to continue carrying out his duties without disruption while recovering,” he added.

WATCH l Trump speaks to Fox News about getting tested: 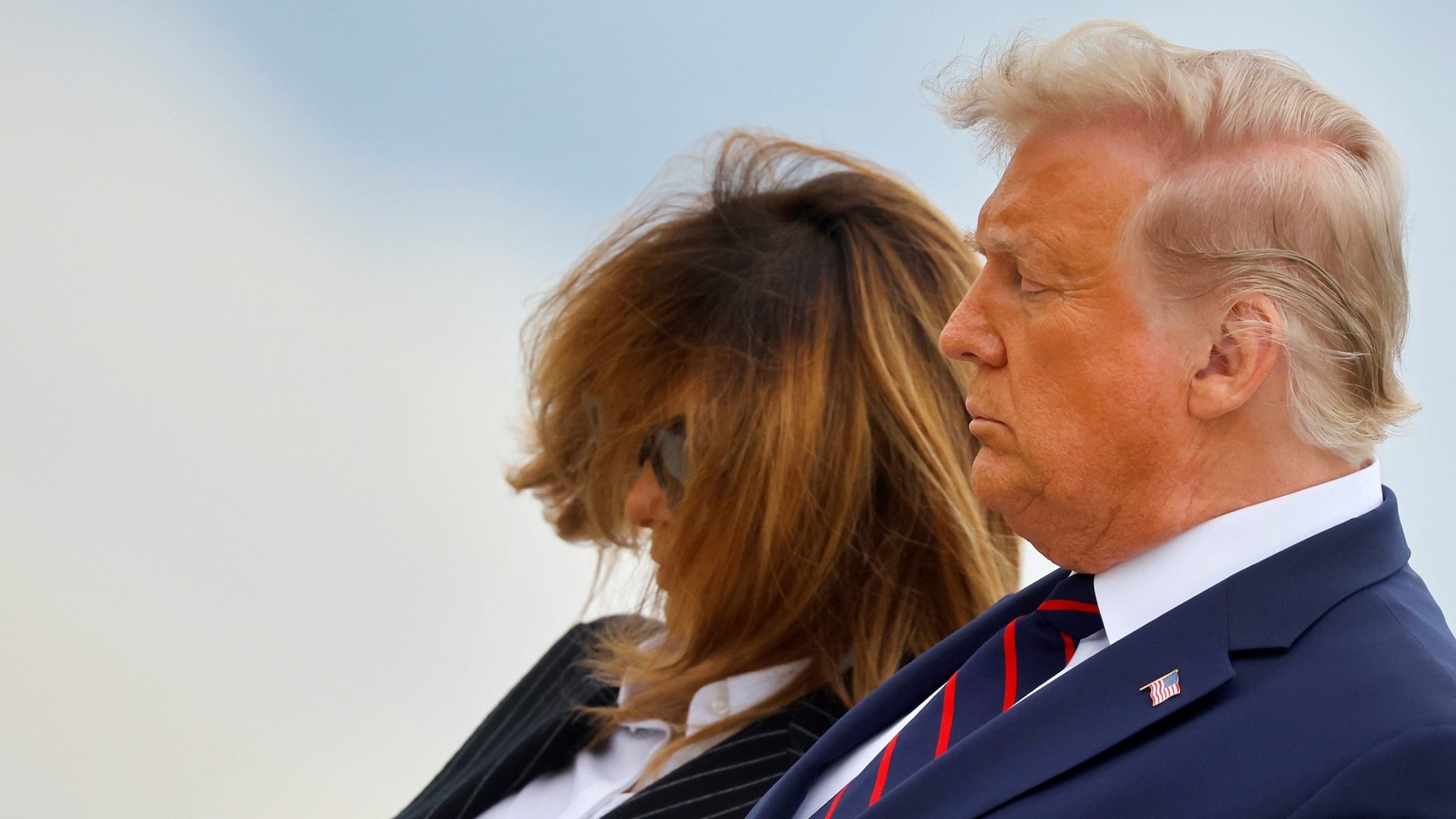 Thursday night on Fox News, U.S. President Donald Trump confirmed he ‘just went for a test’ for the novel coronavirus, but made no mention of having received results. A few hours later, Trump tweeted that he and his wife had tested positive. 0:31

The diagnosis, just weeks before the Nov. 3 election, marks a major blow for a president who has been trying desperately to convince the American public that the worst of the pandemic is behind them, despite a growing national death toll of more than 205,000 and seven million confirmed infections. And it stands as the most serious known public health scare encountered by any sitting American president in recent history.

Trump’s handling of the pandemic has become a major flashpoint in his race against Democrat Joe Biden, who spent much of the summer off the campaign trail and at his home in Delaware. Biden has since resumed a more active campaign schedule, but with small, socially distanced crowds because of the virus. Biden also regularly wears a mask in public, something Trump mocked him for at Tuesday night’s debate.

“I don’t wear masks like him,” Trump said of Biden. “Every time you see him, he’s got a mask. He could be speaking 200 feet away from me, and he shows up with the biggest mask I’ve ever seen.”

Watch | Science vs. politics and the COVID-19 vaccine:

Democratic presidential candidate Joe Biden says he and his running mate Kamala Harris trust the scientists when it comes to the COVID-19 vaccine prompting Donald Trump to question Biden’s intelligence. 1:54

There was no immediate comment from the Biden campaign on whether the former vice-president had been tested since appearing on the debate stage with Trump or whether he was taking any additional safety protocols.

Symptoms of COVID-19 can include fever, cough and breathing trouble. Most people develop only mild symptoms. But some people, usually those with other medical complications, develop more severe symptoms, including pneumonia, which can be fatal.

Pence and his wife, Karen, tested negative for the coronavirus, the White House said Friday morning.

A number of world leaders sent their best wishes to the president and his wife for a speedy recovery, including Canadian Prime Minister Justin Trudeau, who spent time in isolation as a precaution early in the pandemic after his wife, Sophie Grégoire Trudeau, tested positive.

Trump had been scheduled to attend a fundraiser at his Washington, D.C., hotel and hold a political rally in Sanford, Fla., on Friday evening. But just after 1 a.m., the White House released a revised schedule with only one event: A phone call on “COVID-19 support to vulnerable seniors.”

Hicks, one of the president’s most trusted and longest-serving confidants, began feeling mild symptoms during the plane ride home from a rally in Minnesota on Wednesday evening, according to an administration official who spoke on condition of anonymity to disclose private information. She was isolated from other passengers aboard the plane, and her diagnosis was confirmed Thursday, the person said.

Hicks had been with Trump aboard Marine One en route to that rally and accompanied him aboard Air Force One to Tuesday’s presidential debate in Cleveland.

Melania Trump said in a tweet that she had postponed all upcoming engagements. “Please be sure you are staying safe & we will all get through this together,” she wrote.

As too many Americans have done this year, <a href=”https://twitter.com/POTUS?ref_src=twsrc%5Etfw”>@potus</a> &amp; I are quarantining at home after testing positive for COVID-19. We are feeling good &amp; I have postponed all upcoming engagements. Please be sure you are staying safe &amp; we will all get through this together.

Trump had consistently played down concerns about being personally vulnerable to contracting COVID-19, even after White House staff and allies were exposed and sickened.

“I felt no vulnerability whatsoever,” he told reporters back in May.

He has instead encouraged governors to reopen their states and tried to focus the country’s attention on efforts to revive the economy — not a growing death toll — as he seeks another four-year term. 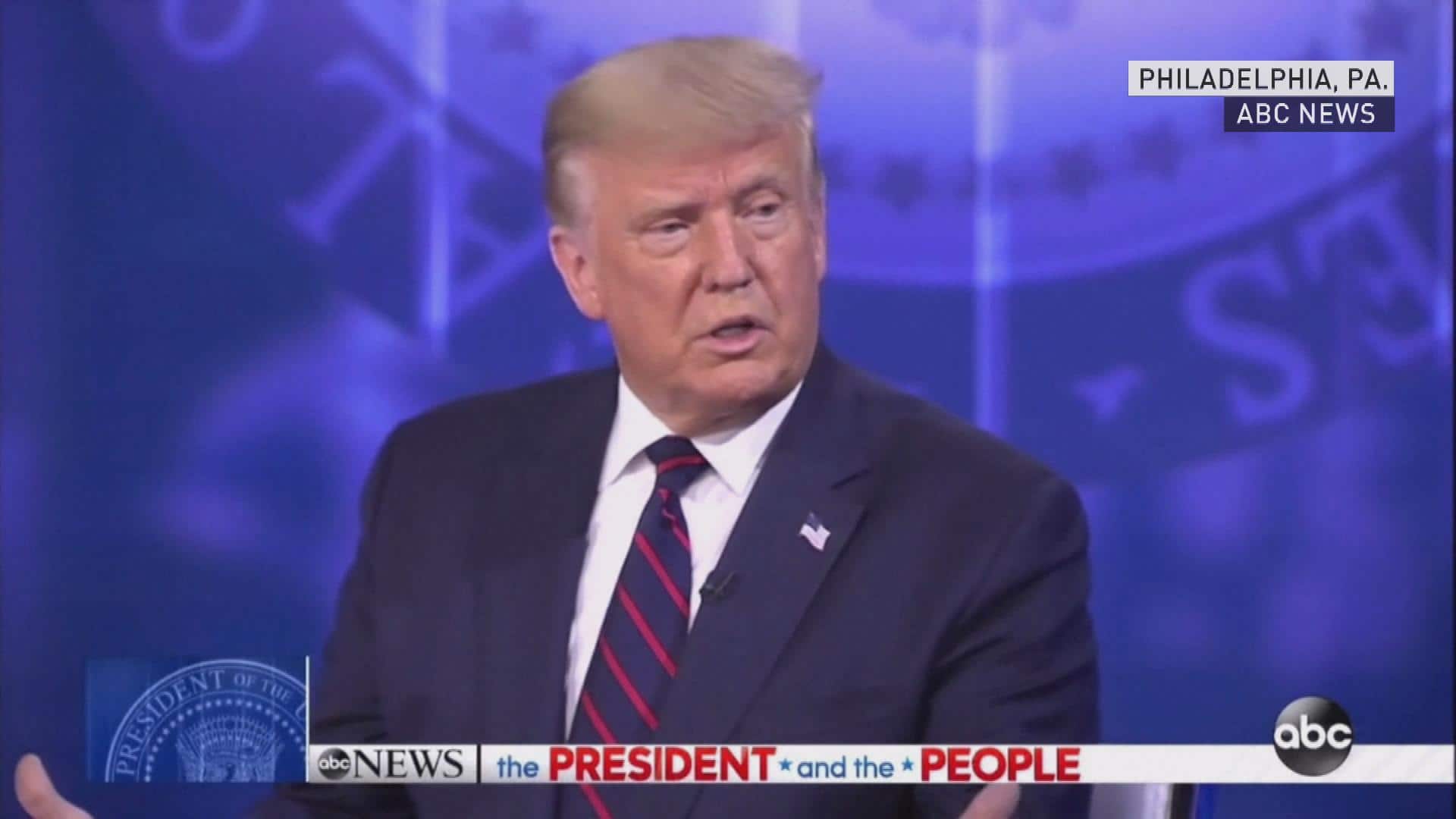 At an ABC News town hall, U.S. President Donald Trump claimed a coronavirus vaccine is just three to four weeks away. He also claimed that he never downplayed the virus publicly, despite evidence to the contrary. 0:46

The news was sure to rattle an already shaken country still grappling with how to safely reopen while avoiding further spikes. The White House has access to near-unlimited resources, including a constant supply of quick-result tests, and still failed to keep the president safe, raising questions about how the rest of the country will be able to protect its workers, students and the public as businesses and schools reopen.

Senior staff have been tested for COVID-19 daily since two people who work at the White House complex tested positive in early May, prompting the White House to step up precautions. Everyone who comes into contact with the president also receives a quick-result test.

Yet since the early days of the pandemic, experts have questioned the health and safety protocols at the White House and asked why more wasn’t being done to protect the commander in chief. Trump continued to shake hands with visitors long after public health officials were warning against it and he initially resisted being tested.

He has been reluctant to practise his own administration’s social distancing guidelines for fear of looking weak, including refusing under almost all circumstances to wear a mask in public.

The pandemic has hit world leaders along with everyone else, previously infecting Brazilian President Jair Bolsonaro and British Prime Minister Boris Johnson, who spent a week in the hospital, including three nights in intensive care, where he was given oxygen and watched around the clock by medical workers. Foreign Minister Dominic Raab took over from Johnson on an interim basis.

The White House got its first COVID-19 scare in early March when at least three people who later tested positive came in close proximity to the president at his private Florida club.

In mid-March, as the virus continued to spread across the country, the White House began taking the temperature of everyone entering the White House complex, and in April, it began administering rapid COVID-19 tests to all those in close proximity to the president, with staffers being tested about once a week.

On May 7, the White House announced that a member of the military serving as one of the president’s personal valets tested positive for the virus, followed a day later by a positive diagnosis for Katie Miller, Pence’s press secretary.

Even then, Trump said he was “not worried” about the virus spreading in the White House. But officials again stepped up safety protocols for the complex, directing everyone entering the West Wing to wear a mask.

By June, concerns at the White House had dissipated once again, with few staffers bothering with masks even as more and more people tested positive for the virus, including campaign staffers preparing for a Tulsa rally, Secret Service agents, Trump’s national security adviser, Robert O’Brien, and Kimberly Guilfoyle, who works for Trump’s campaign and is dating his eldest son.