You Are Here Home Health News U.S. to resume use of Johnson & Johnson COVID-19 vaccine 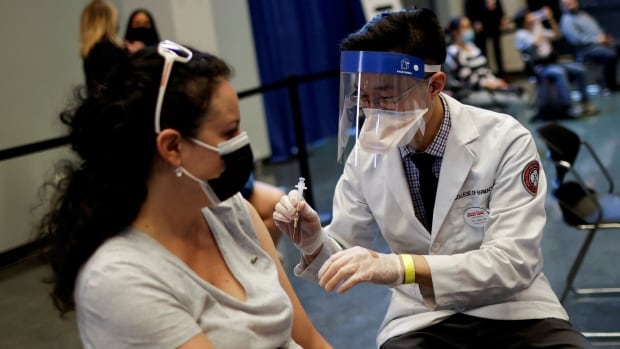 The U.S. Centers for Disease Control and Prevention (CDC) and the U.S. Food and Drug Administration (FDA) said in a joint statement that health systems and vaccine recipients would be warned of the risk of a potentially fatal syndrome involving severe blood clots and low platelets.

The decision came hours after advisers to the CDC recommended its resumption despite evidence that it is linked to extremely rare but potentially deadly blood clots. Regulators in the U.S. paused use of J&J’s vaccine last week to review reports of rare but serious blood clots associated with low blood platelets.

“We are no longer recommending a pause in the use of this vaccine,” CDC director Rochelle Walensky told a news briefing.

The vaccine could be used starting immediately, she said.

Out of nearly eight million people in vaccinated in the U.S. before the use of the shot was suspended, health officials uncovered 15 cases of a highly unusual kind of blood clot — all of them were women, with most younger than 50. Three of them died, and seven remain hospitalized.

Advisers to the CDC said while J&J’s vaccine is important for fighting the pandemic, it’s also critical that younger women be told about that risk in clear, understandable terms — so they can decide if they’d rather choose an alternate vaccine instead.

The panel voted 10-4 to lift the pause while adding warnings that women and health workers would see in leaflets at vaccination clinics. The group debated but ultimately steered clear of outright age restrictions.

“This is an age group that is most at risk [of the clotting] that is getting vaccine predominately to save other peoples’ lives and morbidity, not their own. And I think we have a responsibility to be certain that they know this,” said Dr. Sarah Long of Drexel University College of Medicine, who voted against the proposal because she felt it did not go far enough in warning women.

European regulators earlier this week allowed the rollout of J&J’s shot after concluding those benefits outweigh what appears to be an exceedingly rare risk, and many U.S. health experts agree.

J&J’s COVID-19 vaccine is approved for use in Canada. Earlier on Friday, Maj.-Gen. Dany Fortin — the military commander leading Canada’s national vaccine distribution effort — said the country will receive its initial shipment of 300,000 doses next week and they’ll be distributed to the provinces the following week.

Dr. Paul Stoffels, J&J’s chief scientific officer, pledged that the company would work with U.S. and global authorities “to ensure this very rare event can be identified early and treated effectively.” J&J already was working with the FDA on a warning label for the shot.

Top health officials have said they hope for a quick return to the vaccine’s use after the panel meets.

“The benefits do clearly outweigh the risk from a population and individual perspective,” said Beth Bell, a member of the advisory panel and a clinical professor in the department of global health at the University of Washington in Seattle.

“It’s a new risk. It’s admittedly an extremely small risk and smaller than many other risks that we choose to take every day,” she added.

Two-dose vaccines from Pfizer-BioNTech and Moderna, which are made differently and haven’t been linked to clot risks, are the mainstay of the U.S. vaccination effort. But J&J mass vaccination clinics were cancelled after the April 13 pause, and many states had been counting on the one-and-done option to also help protect hard-to-reach populations including people who are homeless or disabled.

“You can bring the vaccine to the person rather than having to bring the person to the vaccine. So there is a great desire to continue using this vaccine,” said Dr. William Schaffner of Vanderbilt University.