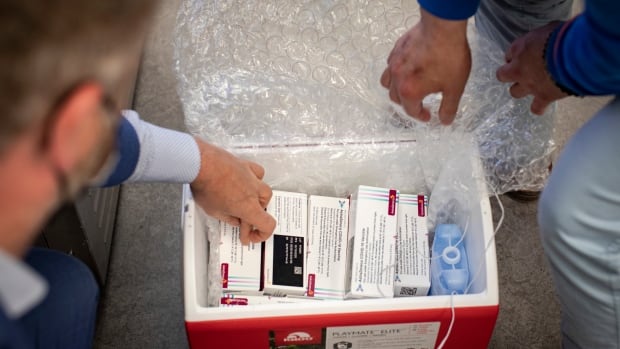 The National Advisory Committee on Immunization (NACI) is recommending the provinces stop administering the AstraZeneca vaccine in most cases — even as booster shots for people who’ve already received first doses of the product.

NACI said Thursday that AstraZeneca recipients should instead receive a second dose of an mRNA vaccine, like the ones offered by Pfizer and Moderna.

“An mRNA vaccine is now preferred as the second dose for individuals who received a first dose of the AstraZeneca/COVISHIELD vaccine, based on emerging evidence of a potentially better immune response from this mixed vaccine schedule,” NACI said in a statement released today. The “mixed vaccine schedule” refers to the practice of using different products for the first and second doses.

The guidance to divert AstraZeneca doses from the supply chain comes weeks after NACI, an independent body composed of volunteer experts, said the AstraZeneca shot is not the “preferred” product for first doses given its associated risk of vaccine-induced immune thrombotic thrombocytopenia (VITT) — a condition that causes blood clots combined with low platelets.

NACI said there is also a risk of developing VITT after receiving a second dose of AstraZeneca.

Since early May, all provinces have halted the use of AstraZeneca for first doses. Many have continued using it for booster shots.

However, the vaccine committee said evidence emerging from studies in Germany suggests mixing one dose of AstraZeneca with a second dose of a Pfizer vaccine can actually produce “a potentially better immune response, including against variants of concern” than two doses of AstraZeneca alone.

“Evidence continues to suggest a first dose of the AstraZeneca vaccine followed by a second dose of the Pfizer-BioNTech mRNA vaccine has a good safety profile,” NACI said.

NACI is also recommending that mRNA recipients receive a second shot of whatever product they received first.

The second shot should match the first unless “the same product is not readily available, or the product used for the first dose is unknown.” NACI said. The two mRNA products can be considered “interchangeable,” the body said.