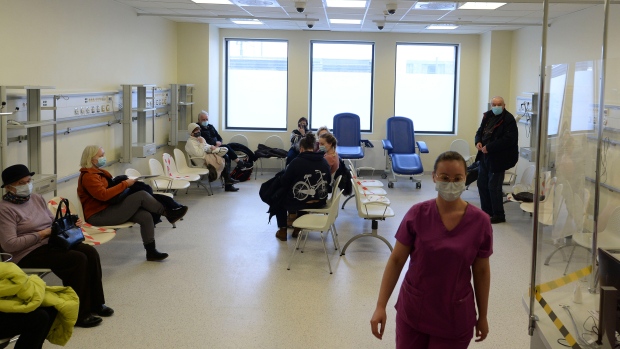 PRAGUE, CZECH REPUBLIC — Authorities in central Europe warned on Friday that they are seeing a surge in coronavirus cases across their region amid the discovery of new variants.

The Polish health minister, Adam Niedzielski, said the first case of a variant first found in South Africa had been discovered in Poland, and that some 10 per cent of all cases now involve the variant that emerged in England.

“We are entering a crisis situation again. It is up to us where the peak of this third wave will be” Niedzielski said. “Responsible behaviour is key.”

The Czech Republic, one of the hardest-hit countries in the 27-member European Union, moved Friday to further tighten restrictive measures amid a surge of the English variant. The government said the worsening situation has forced it to abandon its plans to reopen all stores as early as next week.

Neighbouring Slovakia is also badly hit. It became the country with the most COVID-19 deaths by size of population in the world this week amid a surge of the English variant.

The number of COVID-19 patients in Slovakia’s hospitals reached a new record high of 3,900 on Thursday — a situation that has prompted leaders to appeal for outside help. So far, Austria, Poland and Hungary have agreed to deploy medical staff to Slovakia.

In Hungary, where a steady decline in daily infections and deaths from December reversed course early this month, there are now fears of a new surge even as the country began receiving shipments of Russian and Chinese vaccines.

“We are clearly in the ascending phase of the third wave,” Chief Medical Officer Cecilia Muller told an online press briefing Friday.

Czech Health Minister Jan Blatny said residents will also have to wear better masks in places where large numbers gather, including stores, hospitals and public transportation. He said cloth masks used so far by many will no longer be good enough and medical-grade masks, safety respirators or two surgical masks will instead be required.

“We’ve agreed that it’s necessary to do all we can to prevent the infection from spreading,” Blatny said.

In Poland also a debate has opened about the need to require better masks. The health minister said there would only be recommendations for now, but the government wants to discourage the use of scarfs and plastic face shields.

The central European region saw very few infections when the virus first arrived in Europe a year ago, only to see a huge spike in infections and deaths in the fall of 2020.

In the Czech Republic, the three hardest-hit counties, on the border with Germany and Poland, are under a complete lockdown. The number of new infections per 100,000 inhabitants in the last seven days there is around 1,000.

Further measures, including a complete lockdown of more counties, will be discussed over the weekend. The government is also planning to make COVID-19 tests mandatory for all employees not working from their homes.

The Czech government wants to go ahead with a plan to partially reopen schools, with the students of the final grade at high schools coming back on March 1. All students will have to get tested regularly, with the government providing all necessary tests, while teachers will be preferentially vaccinated.

Some Czech hospitals have been in a critical situation and have to transport COVID-19 patients to other clinics across the country. The number of patients needing intensive care was at a record high of over 1,200 this week. Only 14 per cent of all ICU beds remain still available.

Officials in Germany are also warning that a recent decline in infections could be reversing.