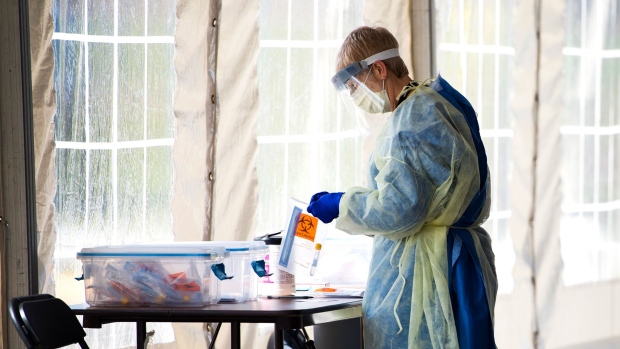 TORONTO — As a critical shortage of life-saving medical equipment looms amid the COVID-19 pandemic, front-line health-care workers say more needs to be done to address Canada’s supplies before the crisis worsens.

Dr. Melissa Yuan-Innes, a physician at the Glengarry Memorial Hospital in Alexandria, Ont., started a petition three weeks ago warning of a shortage and calling on the provincial and federal governments to act.

“We started this petition weeks ago because we could see the problems across the world so we didn’t want to wait for it to be happening in Canada before we acted,” Yuan-Innes said in an interview with CTV News Channel on Friday.

“You could already see physicians, for example, dying in Italy because they didn’t have gloves, and we didn’t want the same thing happening here,” she added.

As of Friday morning, the petition has nearly 192,000 signatures.

Public Services and Procurement Minister Anita Anand said on Tuesday that the government has secured more than 230 million surgical masks and has ordered more than 75 million N95 masks.

However, Yuan-Innes says health-care workers have yet to see those supplies reach their facilities.

“We’re glad that Trudeau and other provincial leaders have moved towards trying to get us equipment, the problem is we’re not seeing it manifest on the ground — not only in our hospitals, I’m concerned about our paramedics who don’t have masks, and obviously long-term care facilities,” Yuan-Innes said.

The federal government previously admitted it “likely did not have enough” personal protective equipment stockpiled ahead of this pandemic, but insists it has aggressively pushed forward with procuring more.

“We are working, I would say, 24 hours around-the-clock, trying to procure equipment in a global situation where equipment is extremely tight,” Health Minister Patty Hajdu said in a news conference on Tuesday.

“Our government has the money, we have the will, we have the workforce, and everybody’s focus is firmly on getting PPE,” Hajdu said.

According to government documents obtained by CTVNews.ca, as of Feb. 10 an assessment of the stockpiles of personal protective equipment was underway, and attempts had already begun to procure more supplies.

Now, nearly two months later, efforts to procure these much-coveted products from abroad remains a struggle, and the federal government has asked domestic companies to pivot their production lines to start manufacturing the life-saving supplies.

Yuan-Innes says doctors and nurses need more of the protective equipment to properly do their jobs.

“Other people have compared it to being a firefighter and being asked to run into a burning building without equipment on — you would never ask people to do that,” she said. “That’s why we need the equipment now.”

According to Yuan-Innes, the hospital she works at has run out of masks with attached visors and is running low on both surgical and droplet masks. She says the hospital is working to try to recycle the supplies and has resorted to asking the community for donations.

Other emergency physicians are also bracing for the worst of the COVID-19 battle amid the growing shortage of critical supplies.

Toronto emergency physician David Carr told CTV News Channel that, based on the federal government’s projections released Thursday, the outbreak will get worse and the need for protective equipment will continue to grow.

“When the Prime Minister made projections yesterday that 2.5 per cent of the population getting this is a best-case scenario, that is about 940,000 patients in Canada having it. We’re at 21,000 right now in Canada so we have a long way to go to hit that peak,” he said.

“The key with containment is to spread that over a really long time so that your healthcare resources and infrastructure have time to cope,” Carr said. He added that that isn’t the case in most Canadian hospitals.

Carr says that the lack of supplies coupled with an increase in coronavirus cases is taking a toll on hospital workers.

“For those of us who love what we do, it’s not as much fun as it used to be. It’s certainly very stressful but we are prepared and this is what we are trained to do — and there’s really no other choice,” Carr said. “We really are in battle.”

Dr. Zain Chagla, an infectious disease physician at Saint Joseph’s Healthcare in Hamilton, Ont., said that even with a shortage of PPE, Canadians can help reduce the need for supplies by practising physical distancing measures.

“It’s apparent that this is hitting our communities and the frontline is ready and willing to deal with what comes in, but we are urging everyone to distance to make sure that we are not seeing a tsunami wave [rather than] a calm and calculated increase in cases over time,” Chagla said.

With files from CTVNews.ca’s Rachel Aiello and Rachel Gilmore