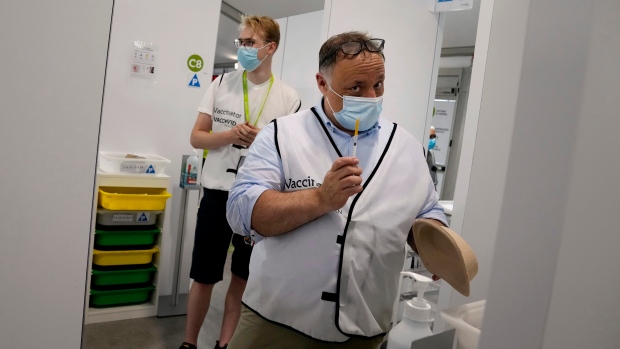 Pfizer and its partner BioNTech plan to ask U.S. and European regulators to approve a booster dose following a two-shot regimen of their COVID-19 vaccine, based on evidence of greater risk of infection six months after inoculation. [nL2N2OK2VD

There is no consensus among scientists yet, however, that a third dose is necessary.

The United Arab Emirates and Bahrain made the Pfizer vaccine available last month as a booster shot to those initially immunized with a vaccine developed by China’s Sinopharm.

The World Health Organization said on Friday that it was not clear whether boosters will be needed to maintain protection, until further data is collected.

The following outlines what options countries and regions are considering on the issue:

The U.S. Food and Drug Administration (FDA) and the Centers for Disease Control and Prevention (CDC) said on July 8 that Americans who have been fully vaccinated do not need a booster COVID-19 shot at this time.

The European Medicines Agency (EMA) said on July 9 it was too early to determine whether more than the two shots would be called for, saying it was confident for now that the established regimen was sufficient.

Recent supply contracts with Pfizer/BioNTech and Moderna have included the potential for the bloc to buy booster shots.

Britain is starting to plan for a booster campaign starting later this year after top vaccine advisers said it might be necessary to give third shots to the elderly and most vulnerable from September.

There has been no final decision on whether a vaccine booster campaign is needed, but officials had advised that preparations should begin on a precautionary basis.

Britain said it would buy 60 million more doses of Pfizer/BioNTech’s vaccine ahead of the possible booster program, bringing its total order of the shot to 100 million doses.

Brazilians should prepare for annual COVID-19 immunisations to reinforce vaccines currently available, the head of public-sector laboratory Butantan said in May.

The country has not yet made a decision over the recommendation of a third dose but is expected to do so in August.

A source close to the health ministry said the government was contemplating the possibility of recommending a third dose from the autumn and that authorities were already laying out logistics, liaising with regional health agencies for preparedness.

Such deployment, however, would still need approval from France’s top heath advisory body which has not yet given a position.

The two countries are considering offering a booster shot to their medical workers immunized with China’s Sinovac vaccine.

Israel’s Health ministry said on July 5 that it was not at this stage planning to administer booster shots to the public but that it was considering rolling them out to people with immunosuppressant conditions who displayed a weak response to the original shots.

Health clinics in Moscow started offering booster shots earlier this month to people vaccinated six months ago or more, making Russia one of the first countries to begin re-vaccination.

Singapore said in May it was making plans for booster shots later this year or early next year, if necessary.

South Korea said in June it plans to secure more mRNA vaccines to use as boosters next year for its entire population of 52 million.

Switzerland has ordered 43 million doses of vaccines, including preparations for potential booster shots in 2022, should they be needed, the Federal Health Ministry has said.

The country’s infection rate is considered very low but has been rising as authorities relax restrictions.

Moderna has struck deals with Spain’s Rovi and Switzerland’s Lonza at a Dutch plant that would boost 50-microgram dose production – half the levels of its original shots — in Europe to up to 600 million doses annually, with the capacity due to come on line this year.