You Are Here Home Health News What’s next for Canada if the WHO calls COVID-19 a pandemic? 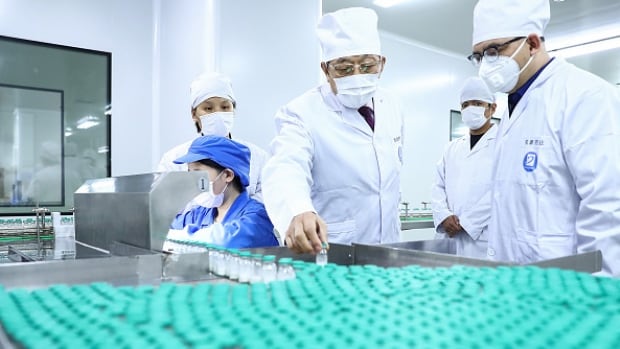 As global tensions mount over the spread of COVID-19, Canada is crafting its own plan to respond to what could become a pandemic.

The World Health Organization (WHO) has declared COVID-19, a respiratory illness caused by the novel coronavirus, an international health emergency. But so far it has resisted using the label “pandemic” — in part because of the panic that could inspire.

On Friday, the WHO elevated the global risk level to “very high,” but Canadian officials maintain the risk here remains low. Fourteen cases have been confirmed to date — seven in British Columbia, seven in Ontario and another unconfirmed case in Quebec.

Officials say preparations are well underway to respond to a global pandemic and a domestic outbreak.

Deputy Prime Minister Chrystia Freeland said that while the government is concerned, Canadians need to take the situation seriously without surrendering to fear.

“I really want people to be confident and reassured that there is a very elaborate, very detailed scenario in place for what we should do,” she told host Chris Hall in an interview with CBC Radio One’s The House airing Saturday.

Here’s what might change if the WHO declares a pandemic, and how Canadians could be affected.

What would authorities do to limit the spread?

Pandemic plans have been developed already and will adapt to any evolving scenario, she said.

“There are going to be some tough decisions that health systems have to make when there are a lot of patients, including prioritizing your beds for those who are most in need. You may need to cancel elective surgeries and that type of thing,” she told host Vassy Kapelos.

Infectious diseases specialist Dr. Michael Gardam said a basic premise of any public health pandemic plan is “social distancing,” which could include closing schools and universities and cancelling public gatherings.

“They don’t stop the virus but they slow it down,” he told The House, adding that a delayed outbreak could ease pressure on hospitals already burdened by the busy flu season.

After the 2003 SARS epidemic, which caught many health professionals off-guard, Canada built up public health infrastructure and medical stockpiles to prepare for future emergencies. Gardham said that now makes Canada better prepared than many other countries to respond to a pandemic — with the caveat that most of the country’s hospitals are now at 100 per cent capacity.

Could there be community quarantines?

Decisions on how to isolate infected persons will be made by local and provincial health authorities. Their approaches could range from recommended self-isolation, to hospitalization, to quarantine.

Tam said public health systems are adept at assessing and isolating people who are contagious and managing infectious diseases.

“So you might see certain settings where exposures could have occurred and that local public health officials will make a determination, and groups of people may need to be in a quarantine,” she said during a briefing with reporters this week.

Toronto’s Medical Officer of Health Dr. Eileen de Villa said that in the event of a pandemic, the city would operate under emergency response protocols. Legislative powers for quarantines come under the Provincial Health Protection and Promotion Act, she told CBC News.

Steps to limit spread of the virus would be assessed and taken after officials weighed the need to prevent the spread of infection against the need for communities to function.

“We are closely watching the global epidemiology and response measures elsewhere including the effectiveness of increased public health measures such as postponing large gatherings,” de Villa said.

“Other actions that could be considered could include postponement of events, or limiting places where people gather in large numbers. This action is a significant measure and can be very disruptive to people and their everyday lives.”

It’s not clear at this point whether Canada’s current stockpile of masks, gloves, respirators and other supplies and equipment is large enough to respond to a pandemic.

Tam said federal and provincial officials are now taking stock of the inventory, but the responsibility for setting aside adequate supplies lies with each province and territory.

The Public Health Agency of Canada (PHAC) coordinates the overarching plan for health emergencies. Tam said that as a result of the “changing landscape” due to COVID-19, officials at all levels are now “pulling together” information.

“Of course, we have to adapt to … the evolution of the outbreak in order to fine-tune some of these estimates … that’s the kind of exercise that’s being undertaken right now. But the granularity of the system’s preparedness is, of course, left to the provinces and territories,” she said.

There are now at least 60 countries affected by the coronavirus, some with isolated cases and others with serious outbreaks.

Officials have said closing borders is ineffective in preventing the spread of the virus, so it’s unlikely that Canada would impose a total travel ban. But international travellers could be at heightened risk of being exposed to the virus, or being stranded by a quarantine situation, if they travel to a zone affected by the COVID-19.

Tam told Power & Politics that every Canadian should consider various factors as the busy March Break travel period approaches, such as their underlying health and age and their planned destination. She stressed the importance of being aware of any symptoms upon returning to Canada, and of self-isolation to avoid exposing others.

What should Canadians do to prepare?

There is no vaccine yet for the novel coronavirus.

PHAC says Canadians should protect themselves against infection by washing their hands frequently with soap, staying home when sick, covering their mouths and noses when coughing or sneezing, and avoiding touching their eyes, nose, or mouths with unwashed hands.

“Although these sound like your basic things that you do every flu season, it is really important for you to rehearse, to talk to your kids and your family and keep practising these kind of measures,” Tam told P&P.

Tam and Health Minister Patty Hajdu also have suggested preparing as you would for a natural emergency such as a severe snowstorm — by setting aside a week’s supply of food, medicine and other household supplies.

Tam also recommended having back-up plans for child care and work in the event someone in the household becomes sick.

Infectious disease specialist Dr. Isaac Bogoch stressed the importance of getting reliable information about the coronavirus from authoritative sources, and said Canadians should take the opportunity to address chronic health care issues and fill outstanding prescriptions.

He told the CBC’s Front Burner podcast that Canadians are feeling daunted by the thought of being at the “precipice of a pandemic.” He offered what he called a uniquely Canadian message.

“You keep your head up and your stick on the ice,” he told host Jayme Poisson.