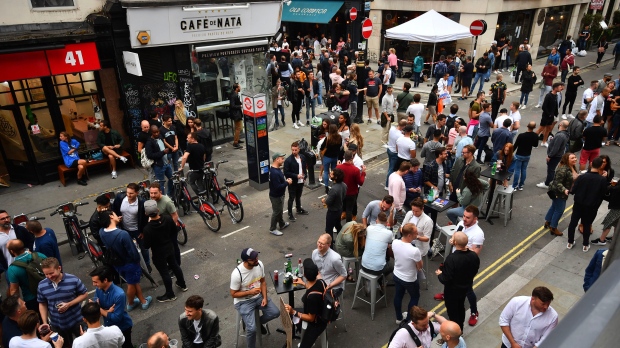 TORONTO — The World Health Organization said its member nations reported more than 212,000 new COVID-19 cases on Saturday, the highest single-day total and increase since the start of the pandemic.

The UN health agency said more than half of the new confirmed infections were reported in Brazil and the United States — the two countries that also have the highest COVID-19 death tolls in the world.

India also reported its highest single-day spike, with 22,771 new confirmed cases for a total of more than 648,000, while South Africa and Russia also saw a surge in infections. Latin America and the Caribbean passed Europe in their total number of cases with more than 2.7 million infections.

The increases are occurring even as some parts of the world forge ahead with reopening plans. This includes Canada, Britain and parts of Europe where new case numbers have been decreasing, but also in some U.S. states where they have not.

The U.S. has recently been reporting record rises in daily COVID-19 case numbers with infections climbing in 40 of its 50 states. Florida and Texas have emerged as the latest hot spots in the country, reporting nearly 20,000 new infections combined.

Many Fourth of July parades and fireworks displays were cancelled because of the virus, but health authorities warned that Independence Day celebrations could add to rising case numbers.

Some experts say the reopening of bars and restaurants in the U.S. is to blame for a spike in infections from patrons abandoning physical distancing rules after having a few drinks.

More than 11.1 million people around the world are known to have been infected with the virus, 2.8 million of them in the U.S., according to a tally kept by Johns Hopkins University. However, with shortages of testing materials across the globe, the WHO says the exact number of COVID-19 cases is unknown.