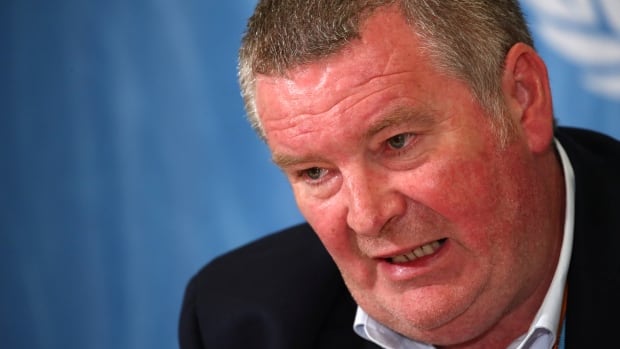 Michael Ryan, executive director at the World Health Organization (WHO) for the Health Emergencies Programme, attends a news conference on Ebola operations in Congo at the United Nations in Geneva, Switzerland on Oct. 10. (Denis Balibouse/Reuters)

The Ebola epidemic in northeastern Congo has been confined to a rural area rife with militias and people on the move, making it harder to stamp out altogether, the World Health Organization (WHO) said on Thursday.

Only 14 confirmed infections were reported last week, the lowest in a year and down from 51 in mid-September and 126 in April at the peak of the outbreak, WHO figures show.

“The fact that it is a smaller area is positive but the disease has also moved into more rural and more insecure areas,” Dr. Michael Ryan, executive director of WHO’s health emergencies program, told reporters on his return from a trip to Congo.

“The virus is essentially back where it began.”

More than 3,200 people are known to have been infected with the virus, of whom 2,144 have died since the world’s second-worst Ebola outbreak was declared in August 2018.

Ryan said the outbreak was confined to a geographic triangle stretching between the towns of Mambasa, Komanda, Oicha and Mandima, though it was still spreading at a low level.

Better tracing of people exposed to the deadly virus, safe burials, and community acceptance of vaccinations — 236,000 to date — have helped, he said.

Mining operations, legal and illegal, abound in the zone, with people going back and forth to their villages, while militias such as the Mai-Mai and the Islamist Allied Democratic Forces (ADF) were also active, he said.

“We have multiple Mai-Mai groups, a very, very big ADF presence in these areas, and ADF has clearly demonstrated over the last few months that it has been carrying out attacks,” Ryan said.

Congolese health authorities said last month that they plan to introduce a second Ebola vaccine, manufactured by Johnson & Johnson, to complement another single-dose vaccine made by Merck, but no date has been announced

“We all want to see that second vaccine in place. The target of this vaccine is not in the epidemic zone, it’s aimed at protecting people outside the epidemic zone, places like Goma, and will provide sort of a firewall potentially,” Ryan said, referring to a city of 2 million on the Rwandan border.