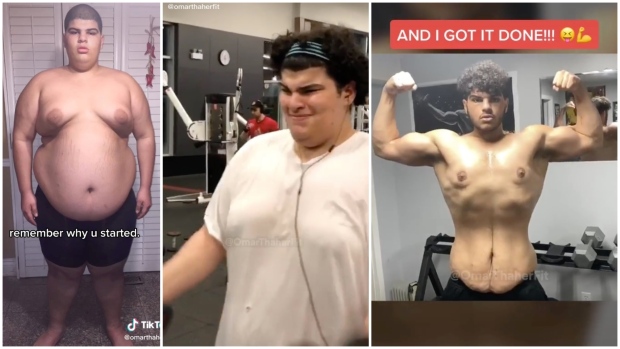 SASKATOON — Omar Thaher couldn’t have imagined that one day he’d be helping others lose weight, with nearly half a million people following his own dramatic weight loss online.

For most of his life, he said “there was never a day where I was really close to a normal weight.”

The past several years have been a whirlwind for the young man from Mississauga, Ont.: Not only has he shed 104 kilograms but now, he’s paying it forward and coaching others on how to do the same.

“It was kind of more than a body transformation. It was a whole life transformation for me,” Thaher told CTVNews.ca in a video interview on Sunday.

“I would not have been able to lose the weight, if I first didn’t lose the negative thoughts I had or the bad habits,” he said, explaining that years of eating unhealthy foods have been replaced by regular exercise and a more balanced diet.

In April 2020, he posted the progress of the previous several years in a TikTok video that has since exploded online, racking up 1.7 million views. Both his TikTok and Instagram accounts have become part-motivational vlogs, part-weight loss journals for his combined 450,000 followers.

Early on, dozens of commenters would ask Thaher for advice or tips and in the past few months, he begun developing fitness and meal plans for paying clients eager to embark on their own weight loss journeys.

“I’m grateful to be able to be in a position where I can provide value to people and help them with things that I myself once struggled with,” he said. “So it’s a huge, positive feeling. It gives more meaning to my life.”

Thaher said he was overweight throughout his childhood and multiple failed attempts to get to a healthy weight left him incredibly disheartened. “There was like a lot of baggage that came with it and it was leaving weight on my shoulders,” he said.

But when Thaher turned 19 years old, “I really just got fed up.”

“I decided I had to really just go all-in on myself because beyond physical health, mentally, I was not doing well,” he said. Thaher began cutting down on processed foods and empty calories, eating healthy foods and hitting the gym.

“Now, there’s a whole new challenge of actually making this a lifestyle,” he explained. “My focus right now is kind of just doing what makes me happy.”

SAVING UP FOR SKIN-REMOVAL SURGERY

Despite the definition in his muscles and his massive weight loss, he still has excess skin he can’t get rid of without surgery.

It’s made working out extremely uncomfortable and has prevented Thaher from wearing the clothes he really wants to wear. So now, he’s saving up for surgeries that could cost tens of thousands of dollars combined.

But for Thaher, it’s simply another challenge he’s taking in stride.

Although these days he spends hours consulting with people on their weight loss plans, his real passion has always been music. And he’s planning on releasing his own songs later this year — something he might not have had the confidence to do before his transformation.

“I hope I can lead by example,” Thaher said. “If you feel like you can’t get a handle of your weight, or you feel like you don’t really see the light at the end of the tunnel, I want to say it’s there. You just have to stay consistent, stay dedicated and believe in yourself.”