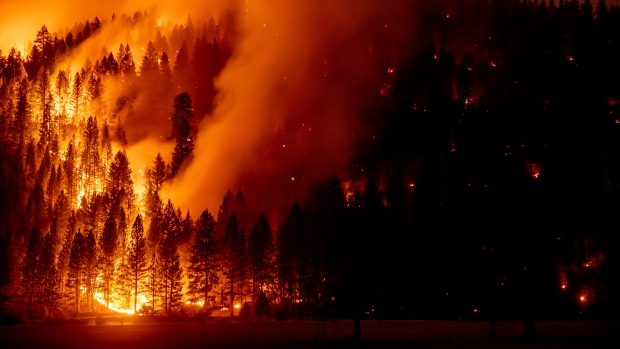 TORONTO — A new study from Stanford University in California suggests that exposure to wildfire smoke during pregnancy increases the risk of preterm birth.

The births occurred before 37 weeks of pregnancy, a timeframe when incomplete development of the fetus heightens the risk of various neurodevelopmental, gastrointestinal and respiratory complications and death, according to a press release.

The study details how wildfire smoke contains high levels of the smallest, deadliest type of particle pollution – or tiny specks of toxic soot – known as “fine particulate matter” or “PM 2.5.” These particles are 2.5 microns in diameter or less, and are fine enough to embed in the lungs and pass into the bloodstream.

When levels are high, PM 2.5 is what causes the air to appear hazy and reduces visibility, and wildfire fine particle pollution comprises a different chemical makeup than other sources of PM 2.5, such as agriculture, tailpipe emissions and industry emissions.

To compile the study data, researchers analyzed satellite data of smoke plumes from the National Oceanic and Atmospheric Administration (NOAA) to identify ‘smoke days’ for 2,610 zip codes in California.

They then compared the data with estimates of ground-level PM 2.5 pollution rates, which were developed by a machine learning algorithm that analyzed information from air-quality sensors, satellite observations and computer models of how chemicals move through the atmosphere.

Looking at patterns of how preterm birth within each zip code changed when the number and intensity of smoke days rose above normal for each location, researchers found that every additional day of smoke exposure during pregnancy raised the risk of preterm birth – regardless of race, ethnicity or income.

A full week of wildfire smoke exposure meant 3.4 per cent greater risk of preterm labour compared to a pregnant person exposed to no wildfire smoke. Exposure during the second trimester, between 14 to 26 weeks of pregnancy, had the strongest impact, the study says, especially when the smoke was heavy enough to add an additional 5 micrograms per cubic metre to PM 2.5 levels.

The study results show wildfire smoke may have contributed to more than six per cent of preterm births in California in the worst smoke year of the study period, 2008.

Researchers posit in the study that the link between wildfire smoke exposure and preterm birth is that the pollution may trigger an inflammatory response which then sets delivery in motion.

NO SAFE LEVEL OF EXPOSURE

While the study built on an already established link between particle pollution and adverse birth outcomes, including preterm birth, low birth and infant deaths, it is the first to isolate the effects of wildfire smoke on preterm birth and to establish the importance of exposure timing, the release says.

“Our work, together with a number of other recent papers, clearly shows that there’s no safe level of exposure to particulate matter. Any exposure above zero can worsen health impacts,” said economist and study co-author Marshall Burke in the release. “While as a society it will be extremely difficult to fully eliminate all pollutants from the air, our research suggests that further reductions in key pollutants below current ‘acceptable’ levels could be massively beneficial for public health.”

The study was released as the western U.S. and vast swaths of Canada are again dealing with massive wildfires – a year after the 2020 fire season torched more than 4 million acres of California, with more than half the state’s population experiencing a month of wildfire smoke levels in the range of “unhealthy” to “hazardous,” the study says.

“In the future, we expect to see more frequent and intense exposure to wildfire smoke throughout the West due to a confluence of factors, including climate change, a century of fire suppression and construction of more homes along the fire-prone fringes of forests, scrublands and grasslands. As a result, the health burden from smoke exposure – including preterm births – is likely to increase,” said lead study author Sam Heft-Neal in the release.

HOW PREGNANT CANADIANS CAN STAY SAFE

While the study only addresses data from California, wildfires have burned across massive tracts of land in Canada, particularly in B.C. and the Prairies, with smoke from the wildfires making its way across the country, prompting air quality warnings nation-wide.

Doctors have long known that the environment plays a large role on pregnancy, said Calgary-based obstetrician-gynecologist Dr. Fiona Mattatall. “I think we know that the environment has big influences on pregnancy and on the health of the fetus and newborn,” Mattatall said in a telephone interview with CTVNews.ca Monday. “I think seeing this more specific research, looking at big environmental changes like wildfire and seeing the specifics of how they are impacting pregnancy, that’s a little more surprising.”

Mattatall said her advice to pregnant Canadians who may be living in a wildfire zone or may have increased exposure to wildfire smoke should think first about reducing risk.

“Staying indoors as much as possible and making sure doors and windows are closed would be an easy strategy,” she said, adding that “people who have the ability to have cleaner air inside the space – whether an air filtration system or HEPA filters,” should take advantage of it.

Mattatall said that if pregnant people need to go outdoors, to try and not do anything too strenuous that would require more intense breathing and in turn cause someone to ingest more pollutants.

“If you’re doing a workout, try doing it in the basement instead of going out for a run,” she said.

Mattatall said that pregnant people who are in high-risk areas for wildfires or are experiencing warnings for air quality should consider wearing a “higher level of mask” like an N95 mask while outdoors to reduce exposure to wildfire smoke and its pollutants.

“The second thing I thought about is I’ve been chatting with patients is planning ahead,” Mattatall said. “So if it looks like there’s smoke coming into the area, wildfires are approaching – stock up on essentials to make sure that you can stay inside more.”

In particular, Mattatall said pregnant people with underlying respiratory conditions like asthma should stock up on any medication necessary – including inhalers, which she stressed are safe to use while pregnant.

Pregnant people in areas of heavy smoke pollution, those who have been evacuated and those living in wildfire zones should be conscious of the symptoms of preterm birth and should contact their physician if they have any questions or concerns.

Mattatall said to keep an eye on “symptoms of labour,” when someone is far from term, which can appear “abdominal cramping or lower back pain, increase in pressure in the pelvis or any amount of bleeding would be reasons to get seen and cared for.”

Other symptoms of exposure may appear in the respiratory system.

“Having sort of a more acute reaction to the smoke would be things like having trouble breathing, a heartbeat that’s getting really fast, a headache, changes in how you’re able to focus or concentrate,” Mattatall said. “Nausea will also be another one that would be a warning sign.”